COLUMBUS, Ohio (AP) — An ally of former President Donald Trump who recently stepped down as chair of the Ohio Republican Party launched her bid Thursday for the U.S. Senate seat being vacated by the GOP’s Rob Portman.

Jane Timken’s decision sets up a 2022 primary that already includes former state treasurer and Marine veteran Josh Mandel, another Trump backer who is making his third run for the Senate.

Timken described herself as a “conservative disruptor,” noting that Republicans did well in Ohio during the four years after she took over as state chair with Trump’s backing.

“I completely transformed and united the party into a well-oiled, pro-Trump machine that won conservative victories and advanced an America First agenda at every level — and that delivered a second victory for President Trump in our state,” she wrote.

Timken said in an interview Thursday that, as the former leader of the party, she is intimately familiar with Ohio’s political landscape and its voters — and she believes she is the best candidate to win and keep Portman’s seat for Republicans.

“What I see happening in Washington, D.C., with the Democrats and the Biden administration is harming Ohio families and Ohio workers — higher taxes, open borders and attacks on our oil and gas industry,” she said. “I can’t sit by. I need to be in the fight. And I will fight for Ohio families and their jobs and their freedoms.”

Portman handily won his seat twice but made a surprise announcement in January that he wouldn’t seek a third term, citing his frustration with deep partisanship and dysfunction in American politics.

Timken is untried as a statewide candidate herself, but is well-connected and wealthy. She has already brought on board the manager of Portman’s successful 2016 campaign, Corry Bliss, and seasoned fundraiser Natalie Baur.

On Twitter, Mandel responded to Timken’s announcement Thursday by posting a photo of her looking friendly while posing with former Republican Gov. John Kasich, a vocal Trump detractor. Timken has sought to set herself apart from Kasich, noting that she ousted his hand-picked GOP chair four years ago with Trump’s help.

Kasich, one of Trump’s 2016 presidential rivals, took the unusual step last year of speaking at the Democratic National Convention at which Joe Biden was nominated to run against Trump.

“Obviously, when John Kasich was running for president, I supported our Republican governor. But, quite frankly, John Kasich has disappointed me and many Republicans and I proudly supported President Trump in 2016,” Timken said in response to Mandel’s tweet.

Kasich chimed in on the Twitter spat to post a photo of himself with Mandel, accompanied by a eye-roll emoji. 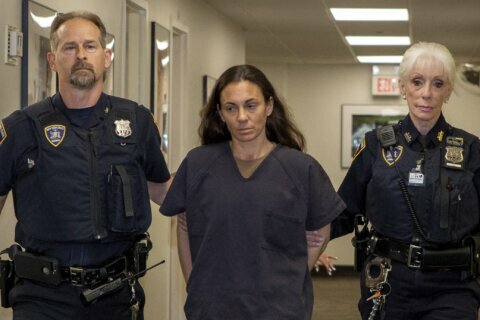