The infusion of cash comes at a critical time for organizers, who are required to collect 1.5 million valid petition signatures by mid-March to qualify the proposal for the ballot.

The funds will go toward hiring workers to gather signatures. So far, that work has fallen largely on volunteers, along with mailings sent to households around the state.

The funds were donated to Rescue California, one of several political committees working to oust Newsom from office. Newsom’s political advisers call the proposal a misguided effort by supporters of former President Donald Trump and other Republicans.

The party wrote the check just days after the Republican National Committee gave the state GOP $250,000 intended to aid the recall drive.

Organizers say they have collected over 1.5 million signatures so far, although it’s not clear how many of them will be disqualified because of technical or other errors. Committees behind the recall hope to gather well beyond the required 1.5 million, to ensure it qualifies.

“We expect to collect another 400,000 signatures,” Rescue California campaign manager Anne Dunsmore said in a statement. With the six-figure donation, “we added a substantial line item to our budget.”

The contribution “will guarantee that we bring in enough additional signatures to hold Gavin Newsom accountable,” she added.

“The facade is gone. It’s never been more clear — they’re admitting that the Republican recall scheme is simple partisan politics,” Newman said in a statement. “Republicans have lost every single state election for 15 years, so they’re trying increasingly desperate, distracting and destructive things.”

Polls show Newsom’s popularity has been sliding as residents recoil from long-running coronavirus rules that have shuttered schools and businesses.

Newsom also has weathered a public drubbing for dining out with friends and lobbyists at a San Francisco Bay Area restaurant last fall, while telling residents to stay home. And more recently, an ever-expanding fraud scandal at the state unemployment agency has his leadership during the pandemic under even closer scrutiny.

Although the recall has yet to qualify for the ballot, the Republican field is continuing to take shape. Among the early candidates: former San Diego Mayor Kevin Faulconer and businessman John Cox, who lost to Newsom in a landslide in 2018. 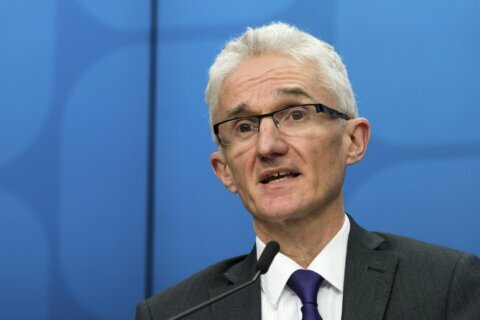