SEATTLE (AP) — Seattle hospitals rushed out COVID-19 vaccines to hundreds of people in the middle of the night after a freezer they were being stored in failed.

It’s not clear what caused the freezer failure Thursday night, but the UW Medical Center’s Northwest and Montlake campuses and Swedish Medical Center received more than 1,300 doses that needed to be used before they expired at 5:30 a.m. Friday, The Seattle Times reported.

Word of the unexpected doses spread on social media, and a line of hopeful vaccine recipients snaked out the clinic door and through a parking lot at UW Medical Center-Northwest. A hundred people lined up at Swedish Medical Center’s clinic at Seattle University. The hospital tweeted at 11:59 p.m. that it had 588 doses to give out, and by 12:30 a.m., all the appointment slots had been taken.

At the UW Medical Center-Northwest, assistant administrator Jenny Brackett walked along the crowd calling out and asking if anyone was over 65. Many of those who showed up were too young and healthy to qualify under Washington state’s current prioritization categories for vaccine distribution. Brackett said the hospital was doing its best to vaccinate those eligible, but that the main objective was to get it into arms and avoid waste.

Anyone who received a first shot Thursday night will also receive the second shot in the two-dose regimen, regardless of age, said Cassie Sauer, president of the Washington State Hospital Association.

One woman plucked from the crowd at UW Medical Center-Northwest, Tyson Greer, 77, said she had been waking up at 1 a.m. or 3 a.m. for more than a week to search online for coveted vaccination appointments. She finally received a shot at 1 a.m. Friday from associate chief nursing officer Keri Nasenbeny.

Many of the staffers working the vaccination clinic had been at work since 7 a.m. Thursday, Nasenbeny said.

When she received word about the freezer failure, she called several nurses, who in turn recruited pharmacists and other volunteers. A Seattle firefighter seemed to show up out of nowhere to help, and a hospital staffer’s boyfriend helped manage the queue.

Those who scored the vaccine were appreciative. Sarah Leyden, 57, got word the shots were available from her wife, a hairdresser, who heard from a client who is a nurse.

“I just got lucky,” Leyden said. 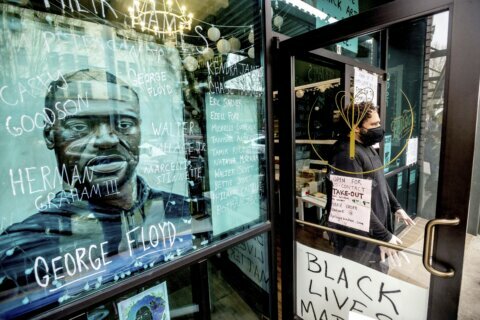