IOWA CITY, Iowa (AP) — A judge has dismissed nine felony counts against a Black Lives Matter leader in Iowa who was charged with shining a laser pointer in the eyes of police officers during an August protest.

Judge Paul Miller ruled Thursday that the Johnson County attorney’s office violated Matè Farrakhan Muhammad’s right to a speedy trial by waiting 46 days after his arrest to file a formal charging document, which was one more day than allowed by law.

Miller ruled that six aggravated misdemeanor assault counts against Muhammad related to the same allegations can proceed because he was never arrested on them, and therefore they were filed on time.

Muhammad, a leader of the Des Moines Black Liberation Movement, told reporters Thursday that he recently changed his name from Matthew Bruce, the name he had when he was arrested. That change is not reflected in court documents.

Prosecutors say that Muhammad shined the laser in the eyes of several University of Iowa police officers during an Aug. 31 protest in Iowa City. Officers allegedly suffered temporary vision loss, headaches and other health problems as a result. He was arrested that night.

To convict him on the remaining misdemeanor counts, prosecutors will have to show that he intended to inflict a serious injury on the officers when he pointed a laser at them.

Muhammad’s attorney, Aaron Marr Page, said Friday that he was grateful that the felony counts were dismissed, saying young people protesting for civil rights should not face such harsh charges. But he said he was struck by the continued legal pursuit of his client.

“I am taken aback by the ambition of this case and what the government now has to prove if they want to follow through on their commitment to jailing Matt Bruce for protesting,” he said, noting that he wasn’t aware of Muhammad’s name change. “I look forward to learning more about the government’s evidence.”

Judge Miller has faced criticism on social media for approving a deferred judgment last month for a white man who drove through a crowd at a different August protest against racial injustice. The Johnson County Attorney’s Office recommended that deal that resulted in no prison time and three years of probation for 45-year-old Michael Stepanek, who told police he drove through the crowd because he thought the protesters needed “an attitude adjustment.”

A victim who cooperated with prosecutors did not seek jail time, saying she feared it would only radicalize Stepanek further and not rehabilitate him. But she argued that the harsher treatment of Muhammad by prosecutors showed a double standard.

Muhammad, 25, still faces a felony criminal mischief charge in Polk County stemming from damage he and others allegedly did to a police car in June during a protest outside of a Hy-Vee grocery store in Des Moines. He has pleaded not guilty to that charge and is awaiting trial.

He and other activists on Thursday criticized Republican Gov. Kim Reynolds’ plans to increase penalties for those who riot or harass police and to cut state funding for cities that vote to reduce their police budgets. They said the plans targeted their members and would exacerbate existing inequalities. 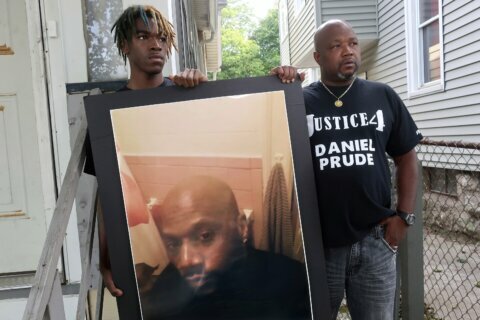