The takeover in 2016 by right-wing extremists of a federal bird sanctuary in Oregon. A standoff in 1992 between white…
Listen now to WTOP News WTOP.com | Alexa | Google Home | WTOP App | 103.5 FM

The takeover in 2016 by right-wing extremists of a federal bird sanctuary in Oregon. A standoff in 1992 between white separatists and federal agents in Ruby Ridge, Idaho. The 1995 bombing of a federal building in Oklahoma City that killed 168 people.

Right-wing extremism has previously played out for the most part in isolated pockets of America and in its smaller cities. The deadly assault by rioters on the U.S. Capitol, in contrast, targeted the very heart of government.

And it brought together, in large numbers, members of disparate groups, creating an opportunity for extremists to establish links with each other.

That, an expert says, potentially sets the stage for more violent actions.

“The events themselves, and participation in them, has a radicalizing effect. And they also have an inspirational effect. The battle of Capitol Hill is now part of the mythology,” said Brian Michael Jenkins, a terrorism expert and senior adviser to the president of the RAND Corporation think tank.

Mary McCord, a former acting U.S. assistant attorney general for national security, said the climate for the insurrection had been building throughout the Trump presidency.

She cited the 2017 “Unite the Right” white supremacist rally in Charlottesville, Virginia that killed one person, aggressive demonstrations at statehouses by armed protesters railing against COVID-19 public health safety orders and mass shootings by people motivated by hate.

“All have led to this moment,” McCord, now a visiting law professor at Georgetown University Law Center, said in an email.

The Southern Poverty Law Center, which monitors U.S. extremists, has recorded a 55% increase in the number of white nationalist hate groups since 2017.

Among those who participated in the Jan. 6 assault on the U.S. Capitol were members of the Oath Keepers, which often recruits current and former military, police or other first responders; the Proud Boys neo-fascist group; followers of QAnon, which spreads bizarre conspiracy theories; racists and anti-Semites; and others with nearly blind devotion to then-President Donald Trump.

“January 6th was kind of a Woodstock of the angry right,” Jenkins said in an interview. “The mere fact those groups were coming together, mingling, sharing this anger, displaying this passion — it is going to have effects.”

But what happens next? Will Jan. 6 be a high-water mark for right-wing extremists, or lead to other attacks on America’s democracy?

Right now, the movement — if it can be called that — seems to be on pause.

Supposedly planned armed protests at all 50 state capitals and Washington this past week that the FBI issued a nationwide warning about drew virtually no one. That could indicate the groups are demoralized, at least temporarily.

Donald Trump is no longer president and his social media reach has been severely curtailed, with Twitter banning him. The extremists had come together in Washington on Jan. 6 because of their fervent belief in Trump’s lies that the presidential election had been stolen, and in response to Trump’s tweeted declaration that the protest in Washington “will be wild.”

But now, some are clearly angry that Trump disassociated himself with the very insurrection that he stoked. They’re upset that he failed to come to the rescue of rioters who were arrested while he was still president and are still being detained and charged.

Online, some people associated with the Proud Boys, which adored Trump, appear to have dumped him.

“No pardons for middle class whites who risked their livelihoods by going to ‘war’ for Trump,” a Telegram channel associated with the group said after Trump issued many pardons, but none for the insurrectionists.

Another posting on the channel said: “I cannot wait to watch the GOP completely collapse. Out of the ashes, a true nationalist movement will arise.”

Believers in QAnon are also reeling after Trump left office without fulfilling their baseless belief that he would vanquish a supposed cabal of Satan-worshipping cannibals, including top Democrats, operating a child sex trafficking ring.

Among them was Ron Watkins, who helps run an online messaging board about QAnon conspiracy theories.

“We gave it our all. Now we need to keep our chins up and go back to our lives as best we are able,” Watkins wrote on Telegram after President Joe Biden was sworn in and Trump flew off to Florida.

Jenkins said the next phase for the extremist groups and people who saw Trump as a savior could transform into a broader national movement in which factions coordinate and combine their assets.

Or the widespread condemnation of the insurrection could cause the movement to shrink, leaving more determined elements to strike out on their own and launch attacks.

Jenkins recalled the 1970s, when some anti-Vietnam War militants hardened into the Weather Underground, which launched a bombing campaign. Among places targeted were the U.S. Capitol and the Pentagon, but the only people who died were three militants who accidentally blew themselves up.

“I think given the events of this past year, and especially what we’ve seen in the last couple of months, this puts us into new territory,” Jenkins said “And you don’t put this back in the box that easily.” 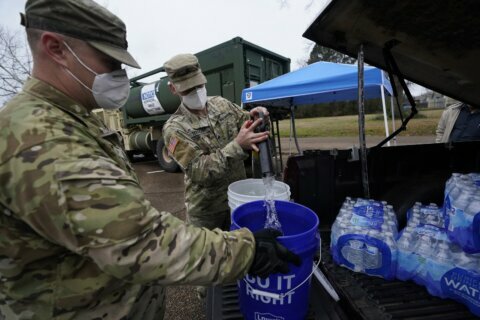