Lady Gaga asked viewers to mask up while speaking at Sunday’s MTV Video Music Awards, and she led by example.

During her multiple appearances during the show, Gaga displayed an impressive collection of masks, but it’s fair to assume she didn’t pick these up at GAP or have them mailed to her by her auntie who can sew.

These masks were 100% what one would expect from Gaga, the woman who once made charcuterie into a fashion statement.

Below, we rank Gaga’s wonderfully OMG PPE — because why not?

4. The artist of the year/TRICON award mask

Possibly sponsored by Reynolds Wrap, this mask was definitely the most accessible of Gaga’s facial coverings. It’s glam without being too much, like something you’d wear to a particularly fabulous trip to CVS. Gaga must have had particular affection for this one, as she wore it twice on Sunday’s broadcast — once while accepting artist of the year and again to accept her TRICON award.

This whole look seemed like something crafted by the team at FOX’s “The Masked Singer” — in the best way. It was fabulously fowl, without being foul. The mask itself looked like a Project Runway contestant would put together if the challenge was to craft only using materials from Home Depot. They’d win, by the way.

2. The “Rain On Me” performance mask

Ironically, the mask Gaga wore during her performance is not something you’d probably want to be rocking if you were actually being rained on. For her electric duet with Ariana Grande, Gaga sported a mask with an electronic edge that seemed to respond to the notes she was belting. Perhaps it was her way of proving she was actually singing, which seems like the kind of thought only an artist like Gaga would have. If ever replicated by Best Buy, this mask would sell out faster than you could say “brain piano.”

1. The song of the year mask

Finally, proof Lady Gaga beat us all to the next stage of evolution: She has horns. With her new tusks, she will spear social injustice and the patriarchy. Hail our horned queen, the one celebrity who always remembers that the VMAs are all about fun and individuality. 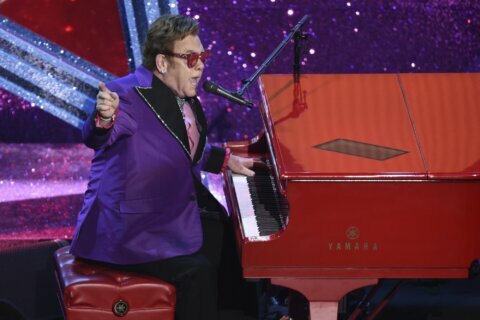