One year later, NASCAR reflects on a COVID-changed sport

AVONDALE, Ariz. (AP) — The big story at Phoenix Raceway one year ago was the remarkable recovery of veteran driver Ryan Newman, who strolled around the infield sipping a soft drink just weeks after a horrific crash in the Daytona 500 had everyone fearing the worst.

It was an entertaining race on a beautiful Sunday afternoon with Joey Logano holding off Kevin Harvick for his second win of the season. Kyle Larson finished fourth, continuing his rise with Chip Ganassi Racing.

Then came COVID-19, and everything in auto racing — and the world — changed.

“Gosh, it doesn’t feel like a year ago,” driver Ryan Blaney said.

After 12 long months, it’ll be a much quieter scene for this year’s spring race in the desert, with a smaller crowd, masks, social distancing and everything else that’s been deemed necessary for sports to continue during a pandemic. It’s a compromise that’s become somewhat normal, even if it’s less than ideal.

“I miss a lot,” Logano said. “Obviously, the fans not being at the racetrack, the energy that they bring is second to none, so that quietness is awful. I like hearing the cheering, the booing and everything in between. I like that. I like having our sponsors at the racetrack and people walking through the garage thinking it’s the coolest thing they’ve ever seen when they see these cars up close.”

NASCAR’s season was paused for two months after Logano’s win at Phoenix. The sport was one of the first in the nation to return on May 17 in Darlington, South Carolina, during a one-day event in front of no fans.

The slow march to normalcy continues in Phoenix.

Little did anyone know that Larson’s fourth-place finish in Phoenix would be his last race with Chip Ganassi Racing.

The driver’s use of a racial slur while participating in an online race last April cost him his job, his reputation and his ability to attract the corporations that fund a race team. Larson wasn’t sure he’d race in NASCAR again until Rick Hendrick took a chance on a him.

Last weekend at Las Vegas Motor Speedway, Larson raced to his first NASCAR victory since he was reinstated from a nearly yearlong suspension. He was hired by Hendrick Motorsports when NASCAR said the suspension would lift at the start of this year.

Bubba Wallace, NASCAR’s only Black fulltime driver, was one of the first competitors to congratulate Larson.

“It meant a lot for Bubba to come to victory lane,” Larson said. “He’s always believed in me. That was special.”

Daytona 500 winner Michael McDowell will be racing close to his hometown of Glendale, Arizona, where he grew up racing karts before moving to North Carolina to pursue his NASCAR dreams.

The 36-year-old McDowell was an unlikely Daytona winner, earning his first Cup victory in his 358th start.

McDowell returned to his old kart track in Glendale on Thursday, where he raced under the lights against local kids aged 7 to 16. He signed autographs and brought his Daytona 500 trophy for fans to check out.

Last year’s spring race in Phoenix was a hot one, with temperatures pushing close to 90 degrees.

Sunday’s race should be quite a bit cooler, with a high around 70 degrees expected, but the rain that fell in the desert on Friday and early Saturday should be gone.

Reigning Cup champ Chase Elliott won at Phoenix in November to clinch his title and is the 5-1 favorite to win Sunday. Kevin Harvick, Brad Keselowski and Denny Hamlin are all 6-1. Defending race winner Joey Logano is 8-1 and Michael McDowell at his home track is 100-1, the same odds he overcame to win the Daytona 500. … The Cup Series has had four different winners in four races to start the season but none by active Cup champions. It is the first time since 2008 that a former series champion did not win in the first four races of a season. … There have been five different winners to start the season 14 times before but not since 2017. The record is 10 different winners in 10 races in 2000. … There are seven former winners at Phoenix in the field. Harvick leads all drivers with nine victories at Phoenix. … Jason Biggs, host of “Cherries Wild” on NASCAR broadcast partner Fox, is the grand marshal. 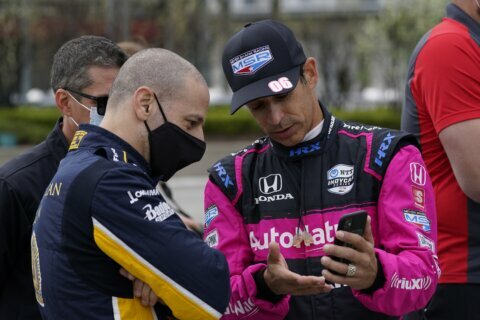