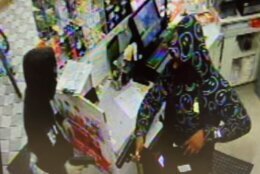 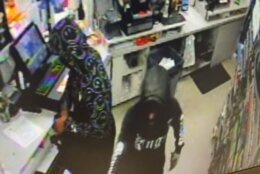 Police have released images from video of an armed robbery at a gas station last week in Rockville, Maryland.

Two male suspects pointed their guns at the gas station worker, announced the robbery, went behind the counter and took “a large amount of vape pens and tobacco products from the shelves” before running off, according to a Montgomery County police news release.

Police described one of the suspects as “a Black male with a thin build, wearing a distinctive black hoody with white smiley faces on it.” He wore a black ski mask, black pants, black shoes and carried a black sling backpack.

Police described the other suspect as “a Black male with a thin build [wearing] a black hoody with the word ‘Kings’ in white lettering on the front of the hoody. He also wore a black ski mask, black pants, and black shoes.”