Stanley Barsch, who has polycystic kidney disease, needed a transplant. It was his former partner on the force, Megan Ambrose, who showed that having your partner's back doesn't end after retirement.
Listen now to WTOP News WTOP.com | Alexa | Google Home | WTOP App | 103.5 FM

A retired Montgomery County police officer is recovering after a successful kidney transplant. The donor: His former partner on the force, who showed that having your partner’s back doesn’t end after an officer makes their final radio call.

WTOP reported in February about Stanley Barsch, who has polycystic kidney disease. It’s a condition Barsch inherited from his mother. And in his case, the cysts caused his kidneys to grow to 15 pounds apiece, reducing his kidney function so much that he needed the transplant.

“I came to a point where I needed help from my network to see if anyone was willing to donate,” Barsch said.

Thirty-one people stepped up to get tested and see if they were matches, he said. And the first was his former partner on the force, retired Montgomery County police officer Megan Ambrose.

On Tuesday May 14th I got the gift of life from my former police beat partner @meganambrose5 . Megan selflessly gave a piece of her life without hesitation to give me the gift of life. My new kidney is functioning like a baby, I’ve lost so much energy over the past few years that has been restored to 100%. My numbers are all looking great, I’m a new man with a new leaf of life !! I’m blessed beyond words can ever comprehend. My young boys ages 6, 4 and 3 have never known my energy level in their lifetime, they’re in for a huge treat!!! I’m blessed with the best at MedStar Georgetown! @insideedition filmed our pre-op, surgery and post. Check out link in my bio #PKD #kidneydisease #giftoflife #kidneytransplant #endpkd #georgetown #georgetownuniversity #medstargeorgetownuniversityhospital @medstarhealth @abcnews @nbc @nbcwashington @nbcnews @theellenshow @ellentube @abc7dc @fox @foxnews @foxnewsradio @cbsnews @cbseveningnews @abcworldnewstonight @nbcnightlynews @todayshow @usatoday @thewesternjournal

For months, he wondered if a match would be found, because finding a living donor gives the recipient a better prognosis overall. Then, it was on Valentine’s Day of this year, which was also National Donor Day, that Ambrose gave Barsch a card that brought him to tears.

“It said, ‘I heard you’re in need of a kidney,’ and went on to say that ‘you can have mine,’ and that she already scheduled surgery for May the 15th,” Barsch said.

“I was more excited that I was able to help him than anything,” Ambrose said.

The procedure took place Tuesday at Medstar Georgetown University Hospital, and was done by the same doctor who performed a transplant for Barsch’s mother many years ago.

As they headed into the procedure, Barsch said he gave Ambrose a note telling her that he loved her and that he will be forever thankful to her.

“How amazing it was for her to give a piece of her life to give me life,” Barsch said.

Three days after the procedure, Barsch is still in the hospital. But he said that he is feeling the best he has in years and that doctors said his new kidney is working great. His energy level has also seen a major boost.

“I’ve got three young boys — and these boys are 6, 4 and 3 years old — and they have never seen me with the amount of energy they are about to be introduced to,” Barsch said.

As for Ambrose, who is recovering at home, she is just glad she was able to help her friend and former partner.

“I am just so grateful that I am able to help him and give him back a part of him that has been missing for so long,” she said.

Ambrose has considered Barsch the big brother she never had, she said.

And “with this kidney inside of me, we are forever joined together,” Barsch said.

Barsch also said there is a good reason for him to tell his story: “I hope that my story brings some inspiration to some people to really consider sharing their spare,” he said.

From the woman who did “share her spare” with her longtime friend and former colleague: “You were given two kidneys. You can live a full healthy life with one. If you feel moved to change someone else’s life, please do so,” Ambrose said.

Barsch joked that he intends to call Ambrose every week to thank her and tell her how much he loves her.

Ambrose’s reaction? “I’m grateful for that, but he doesn’t have to do that,” she said, laughing. 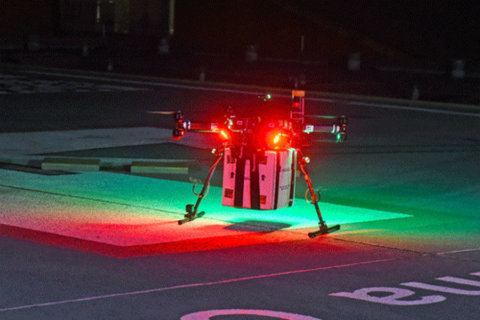