After helping victims of Hurricane Harvey, some first responders from Montgomery County were asked to turn around and help the response to Hurricane Irma.

ROCKVILLE, Md. — Heading home after helping Harvey victims, some local first responders were turned around and sent back south to assist federal response to Hurricane Irma.

“They almost made it to Virginia when they were asked to redeploy to Alabama in support of FEMA teams that are going there,” said Montgomery County Fire and Rescue Service Fire Chief Scott E. Goldstein of Maryland Task Force 1’s Hazmat Push-Pack (HEPP).

“Operating in that toxic soup of floodwaters is very demanding on the equipment that we wear, on the safety equipment that’s worn in these boats,” Goldstein said.

About 30 members of Maryland Task Force 1 who deployed to Texas in swift water rescue and support roles returned to Montgomery County at 11 a.m. Wednesday.

“I was just happy to go and have the opportunity to help people who needed it,” said Frank Turner, a firefighter and paramedic.

Now, it’s back to business.

“Go back home for 48 hours, and then back to work on Saturday.”

Team members worked at a grueling pace in extreme conditions since being deployed Sunday, Aug. 27 and driving 21 hours straight through to Texas.

Debriefing team members who were dropping off equipment at the Dover Road Warehouse in Rockville, Maryland, Task Force Leader Michael Glazier expressed concern about everyone making it all the way home in the rain while fatigued.

“The safety of my guys is my number one priority,” Glazier said. “I told them to drive safe, be careful going home and if they had a minute when they got home, let me know they were OK.”

The team did experience one glitch while away, but it proved to be a relatively easy fix.

“We had a tire blow out, but it was just in the parking lot,” Turner said. “We changed out the tire and kept going.” 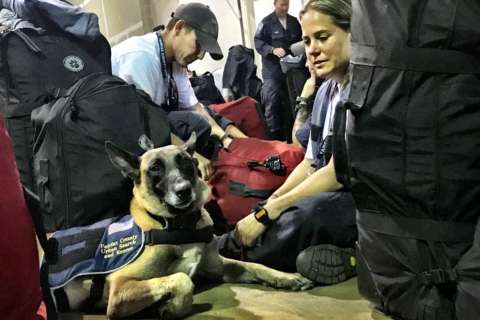