Gerrit Cole brought the Yankees back from the brink, forcing a decisive fifth game in the Bronx in the AL Division Series with a 4-2 win over the Cleveland Guardians in Game 4 on Sunday night.
Listen now to WTOP News WTOP.com | Alexa | Google Home | WTOP App | 103.5 FM
(1/15) 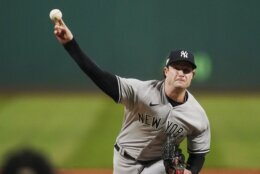 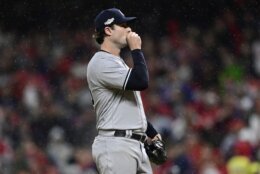 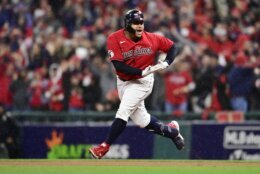 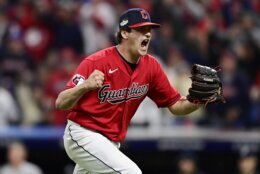 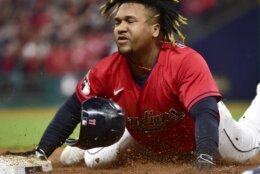 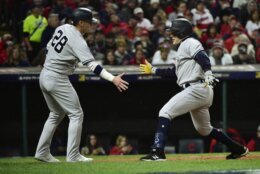 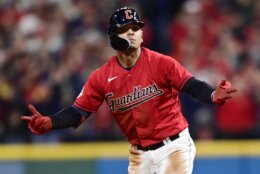 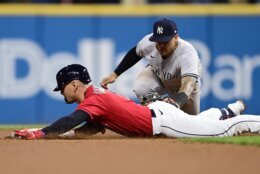 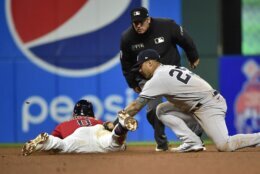 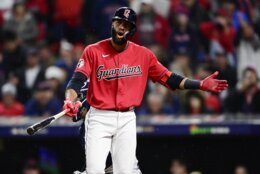 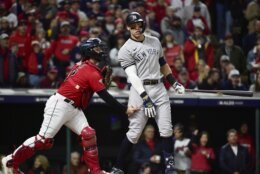 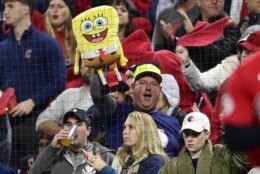 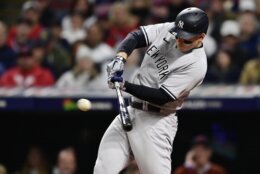 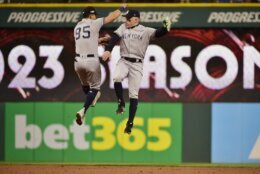 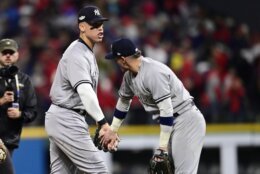 Cole gave New York what it needed, seven solid innings and Harrison Bader hit a two-run homer as the Yankees forced a decisive fifth game in the AL Division Series with a 4-2 win over the Cleveland Guardians in Game 4 on Sunday night.

There was no margin for error, no second chances. Cole, who failed in a similar spot last October, had the weight of New York’s season, the one Aaron Judge’s home-run swing made historic, on his shoulders.

New York’s $324 million man, Cole allowed two runs and struck out eight in beating the Guardians for the second time in six days. He didn’t dominate, but Cole kept Cleveland’s hitters off base and off balance.

Bader homered for the third time in the best-of-five series, connecting in the second inning off Cal Quantrill, who came in unbeaten in 44 games at Progressive Field.

After blowing Game 3 on Saturday, when the Yankees’ bullpen had its greatest meltdown in the team’s storied postseason history, New York recovered and is headed home for a winner-moves-on game.

Josh Naylor homered for the Guardians, who are trying to end Major League Baseball’s current longest World Series drought in their first year after a franchise name change. Cleveland hasn’t won it all since 1948.

With a history of postseason heartbreak, Cleveland teams are 1-7 in winner-take-all games.

“You know if you would have told me back in March, we just signed up to play Game 5 in New York to go to the ALCS, I would have jogged to New York,” Guardians manager Terry Francona said. “I’m excited.”

Cole was pulled after 110 pitches and Yankees manager Aaron Boone brought in closer Clay Holmes for the eighth. Holmes didn’t pitch in Game 3 after Boone decided to shut him down but didn’t tell the right-hander.

Holmes struck out Amed Rosario and All-Star José Ramírez in the eighth before Wandy Peralta finished for the save. Working his third straight day, Peralta retired three batters on just seven pitches.

“Our guys had that look in their eyes tonight, and it starts with Gerrit,” first baseman Anthony Rizzo said. “It’s a complete win for us and that’s who we are and that’s the wins we need to have.”

The Guardians weren’t supposed to be here. But they won the AL Central, swept Tampa Bay in the wild-card round and had the Yankees on the cusp of elimination. All Cleveland’s kids have to do now is beat the Yankees in baseball’s most hostile environment.

This was the kind of game the Yankees envisioned Cole pitching in when they signed him to a nine-year contract in 2019 as a free agent after he spent two seasons with the Astros.

“Gerrit showed up huge tonight and now we’re headed back to the Bronx, where we like our chances,” Holmes said. “We all believed we could win two games, and this is the first step.”

There was no magic this time for the Guardians, who overcame a two-run deficit in the ninth inning on Saturday to win Game 3 in dramatic fashion.

Cleveland not only rallied against New York’s bullpen on Saturday, but the Guardians became the first team in 168 games to overcome a multi-run deficit and beat the Yankees in the postseason.

The Guardians closed within 3-2 in the fourth on Naylor’s second career postseason homer — and third homer in 17 at-bats — off Cole.

Naylor’s laser shot into the seats fronting the outfield bullpens sent Cleveland’s crowd into a frenzy that got wilder as the animated DH circled the bases swinging his arms back in forth as if he was rocking a baby.

Bader’s 429-foot shot into the left-field bleachers put the Yankees ahead 3-0 in the second, and not only gave them momentum but belief they would even the series following their gutting loss in Game 3.

New York’s dugout erupted with shouts and fist pumps as Bader rounded first following his fifth hit in six career at-bats off Quantrill. He also homered in Game 1, when Cole and the Yankees beat Quantrill.

The Guardians got a run back in the third, but missed a chance for more when Ramírez got a little overaggressive on the base paths.

With runners at first and second, Ramírez dropped a bloop into left field that scored rookie Steven Kwan. Thinking he had a chance to take an extra base, Ramírez went about halfway to second before realizing he had no chance and got thrown out retreating to first.

Both managers are expected to empty their bullpens in the finale.

Francona is confident Civale will pitch well, and after that, he’s got Trevor Stephan, James Karinchak and closer Emmanuel Clase — his top three relievers — all rested and ready.

Cole saves his best for Cleveland in the postseason. He’s 4-0 with a 1.98 ERA in four career starts against the Guardians. … Bader’s three homers in the series are his three longest this season. … New York improved to 14-12 in the postseason against Cleveland. … It was the 19th anniversary of Boone’s walk-off homer to beat the Boston Red Sox in 2003.

Boone spent much of his pregame news conference attempting to clarify the communication breakdown between him and Holmes in Game 3.

After the bullpen melted down, Holmes, who was recently sidelined with a shoulder strain, told reporters he was available. Boone, though, said he never informed the right-hander he was down, creating confusion and awkwardness.

Boone said he decided not to pitch Holmes on consecutive days so as not to risk his health. Holmes reported soreness after pitching in Game 2.

“As a competitor, I want to be out there as much as possible, but I totally understand the plan,” Holmes said.

Making his first career relief appearance, Taillon allowed two runs ad three hits without recording an out in Game 2. Civale hasn’t pitched since Oct. 5. He’s won his last three starts with a 3.18 ERA. The right-hander was on the injured list three times this season.

Rays moving spring camp due to damage caused by hurricane

Iran win another step as US soccer tries to boost interest