ARLINGTON, Texas (AP) — Cody Morris and Will Brennan are both only a few games into their big league careers. They are already doing their parts to help the Cleveland Guardians get closer to the AL Central title.

Morris pitched five innings in his fifth MLB start for his first career victory, and Brennan’s two-run single capped a five-run outburst in the decisive frame for the Guardians in a 6-3 victory over the Texas Rangers on Friday night.

“That’s just contagious offense and that’s what we have here,” said Brennan, who played his third big league game since his debut Wednesday. “It’s so much fun. It’s a blast.”

With their 16th win in 19 games, and Chicago’s 5-3 loss at home to Detroit, the Guardians (84-67) can wrap up the division as early as Sunday. They arrived in Texas after a three-game series sweep in Chicago and now have an eight-game lead over the White Sox with 11 games to play.

“It’s really special to be a part of a playoff push and I’m happy that I could, you know, get five innings tonight,” Morris said.

A seventh-round pick by Cleveland in the 2018 draft, Morris (1-2) threw the last of his 80 pitches in his fifth career start just before the Guardians’ decisive frame. The right-hander allowed two runs, one earned, and four hits in his five innings.

All-Star closer Emmanuel Clase loaded the bases after getting the first two outs in the ninth, allowing two singles and hitting Adolis García on his left wrist with a 100 mph pitch, before wrapping up his MLB-best 38th save in 42 opportunities.

García, who with a stolen base in the second inning became the first Rangers player since 2011 with 25 homers and 25 stolen bases in the same season, left the game after initially walking to first base

Rangers interim manager Tony Beasley said the initial X-rays “looked fine,” but that the slugger would be re-evaluated Saturday.

The Guardians trailed 2-1 before six hits and five runs off Taylor Hearn (6-8), who faced only seven batters after taking over to start the sixth.

Steven Kwan reached on a leadoff single in the Guardians sixth, and then there were five consecutive one-out hits. José Ramírez singled before Josh Naylor’s tying RBI double that ricocheted off the right-field wall. Óscar González and Andrés Giménez followed with RBI singles before Brennan’s hit plated two runs for a 6-2 lead.

“All the things they told us, he’s ultra competitive,” Cleveland manager Terry Francona said of Brennan. “He’s helping us win games. That was one thing I tried to explain to him. I said, ‘Don’t worry about your batting average here. You’re here two weeks.’ I said just help us win games, and he said I can do that.”

After hitting .314 with 13 homers and 107 RBIs in 129 games combined at Triple-A and Double-A this season, Brennan is 4-for-11 in the big leagues. He also had his first two stolen bases Friday night.

“It just takes maybe a little pressure off,” Brennan said. “But coming up here to guys that I know and, you know, that I’m comfortable with in the locker room makes that much easier got out there and play and do my thing.”

Hearn took over for Jon Gray, who had limited the Guardians to one hit and an unearned run through five innings. But it was only the third start back for the team’s opening-day starter since coming off his third trip to the injured list this season; he was out Aug. 2 until Sept. 11 with a left oblique strain. The right-hander threw 87 pitches.

Cleveland played in Texas for the first time since the 2021 regular-season finale, which was the team’s last game as the Indians before changing their name to the Guardians after 107 seasons. That was a 6-0 victory to finish 80-82, their only losing record in Francona’s 10 seasons, though their last division title was in 2018.

The Rangers led 2-0 in the second after an RBI single by Kevin Plawecki, the veteran catcher designated for assignment by Boston last weekend and signed by the Rangers on Wednesday. The second run came home on that play on a wide throw by center fielder Myles Straw that got past catcher Luke Maile for an error.

Plawecki’s throwing error in the third when trying to get Naylor at second on a stolen base allowed Amed Rosario, who led off with a triple, to score.

Rangers: RHP Joe Barlow (right index finger blister) was activated from the 15-day injured list. He pitched for only the second time since the All-Star break with one strikeout in a scoreless eighth. Barlow took the roster spot of left-hander Brett Martin, who was placed on the bereavement list. 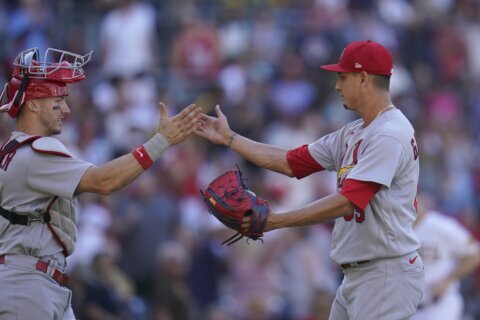 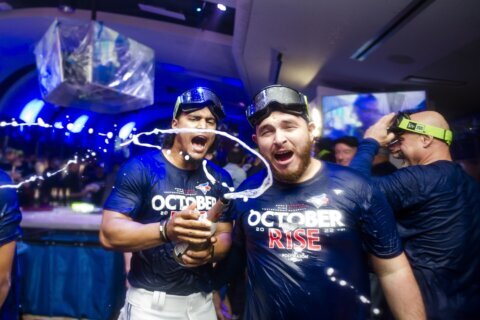