ST. LOUIS (AP) — St. Louis Cardinals rookie Juan Yepez has made the most of having Albert Pujols as a teammate and a mentor.

Yepez had his first career multi-homer game, Paul Goldschmidt went 4 for 4 with a home run and 2 RBIs, and Adam Wainwright pitched seven scoreless innings in the Cardinals’ 9-0 rout of the Miami Marlins on Monday night.

“It’s so much fun,” said Yepez, whose five RBIs matched a team game-high for the season. “Like if you’re telling me that I was gonna play with Albert Pujols, I’ll be like, ‘Are you kidding me?’”

Cardinals manager Oliver Marmol said Yepez has made some adjustments.

“One being mental, as far as what he’s doing with his approach and staying through the middle of the field,” Marmol said. “The second one mechanical and not opening up that front side. But he’s made a really good adjustment and we’re seeing the results now.”

Wainwright (6-5) scattered seven hits through his first five innings, but escaped trouble with the help of nine strikeouts. He retired the final seven batters he faced and ended up with his 190th career win.

“It’s a nice, round number,” Wainwright said. “I’m just glad we got the win.”

The Cardinals beat the Marlins for the sixth time in their last seven games at Busch Stadium. Miami has lost three of its last four games.

Goldschmidt’s solo homer in the first, his second in as many games, traveled 402 feet before crashing off the Big Mac Land sign in left field. Yepez’s three-run blast in the fourth went to almost exactly the same location as Goldschmidt’s to give the Cardinals a 4-0 lead.

“Just a lot of work,” Yepez said of his adjustments. “Sometimes I still do it. So, I just needed to trust in the process, trust in the work and eventually I’ll stop doing it.”

Goldschmidt added to the scoreboard with an opposite-field RBI double off the right field wall in the fifth.

“He has the ability to use the whole field,” Marmol said of Goldschmidt. “That ball to right was hammered. He stayed on that pitch really well.”

Yepez — who has three home runs in his last two games — then touched Marlins reliever Richard Bleier for a two-run homer to make it 7-0 in the sixth. Dylan Carlson drove in a run with a triple and scored on a wild pitch in the eighth.

Marlins starter Pablo López (5-4) gave up five runs in five innings. It was the second time in 15 starts this season that López allowed more than one home run.

“I was not successful at changing the eye levels,” López said. “You gotta use your fastball to change the eye levels … we attempted to do it, I just was not getting the fastball there.”

Marlins second baseman Jon Berti extended his hitting streak to 11 games with a third-inning single and stole second for his league-leading 22nd stolen base.

Then he attempted to take third on a wild pitch. Third base umpire Erich Bacchus originally called him safe, but the call was overturned on replay after a Cardinals’ challenge.

Cardinals: Selected rookie RHP James Naile and rookie OF Conner Capel from Triple-A Memphis. Both made their debuts; Naile pitched a scoreless eighth and Capel played left field as a defensive replacement in the ninth.

Marlins: 2B Jazz Chisholm (back spasms) missed his second straight game. Manager Don Mattingly said Chisholm would be available off the bench.

RHP Dakota Hudson (5-4, 3.72 ERA) will start for the Cardinals in the middle game of a three-game set Tuesday against the Marlins and LHP Braxton Garrett (1-2, 4.08 ERA). Hudson took the loss in his last start Thursday in Milwaukee giving up 5 runs in 4 1/3 innings. Garrett allowed 2 runs in 4 1/3 innings in his first career start against St. Louis on June 14. 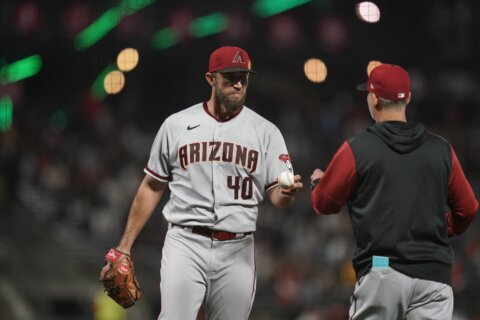 Astros OF Diaz exits against Chisox with discomfort in groin 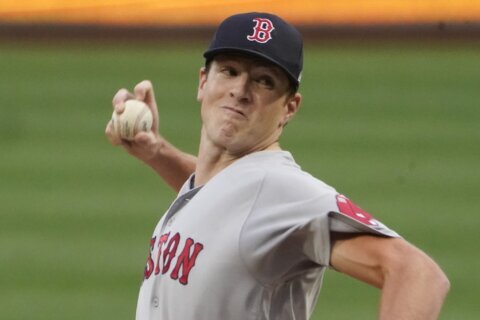