LEADING OFF: Mets at Dodgers in showdown of NL’s best teams

Francisco Lindor and the NL East-leading Mets are headed to California for four games against Mookie Betts and the NL West-leading Dodgers, a showdown of the National League’s top two teams.

Coming off a 6-0 homestand against Philadelphia and Washington, New York is starting a much tougher 10-game trip against Los Angeles, the Padres and Angels. The Dodgers are coming off a disappointing series defeat to the Pirates.

The famed “Iron Horse” became the starting first baseman for the Yankees on June 2, 1925, on the way to playing 2,130 straight games, a record that stood until Cal Ripken Jr. broke the mark in 1995. On June 2, 1941, Gehrig died of Amyotrophic Lateral Sclerosis, now known as Lou Gehrig’s disease.

The Hall of Famer’s life and accomplishments on and off the field will be remembered with tributes and ceremonies across the majors, along with messages and information about efforts to treat and research ALS.

Players, managers and coaches will wear a Lou Gehrig Day patch and there will be ALS-4 logos at the ballparks to celebrate his uniform number. Red 4-ALS wristbands can also be worn on the field.

Teams that are off or on the road can mark Lou Gehrig Day at another date.

Shohei Ohtani hopes to avoid a repeat performance when he makes his second start at Yankee Stadium in the opener of a day-night doubleheader.

Last June 30, the Angels’ two-way sensation gave up a career-worst seven runs while getting just two outs in the Bronx. He quickly put himself in trouble by walking the bases loaded with no outs and Yankees stars Giancarlo Stanton and Gleyber Torres followed with RBI hits.

A big crowd that turned out to see the eventual AL MVP instead watched him walk off the mound and out of the game in the bottom of the first inning.

As if things weren’t dire enough for the Phillies, star Bryce Harper was scratched from the lineup Wednesday with right forearm soreness, and second baseman Jean Segura could miss three months with a fractured right index finger.

Philadelphia entered Wednesday 12 1/2 games behind the Mets in the NL East, with manager Joe Girardi’s seat getting hotter by the day.

It’s not clear how long they’ll be without Harper, who has been the team’s designated hitter after being diagnosed with a small UCL tear in his right elbow. He hurt it on a throw from right field and hasn’t played defense since April 16.

Segura will be out 10 to 12 weeks after injuring himself while attempting to bunt in the seventh inning of Tuesday’s 7-4 11-inning loss to the Giants. He will have surgery as early as Friday.

The Phillies have a day off before opening a series against Mike Trout and the Angels on Friday.

The last-place Nationals have no plans to trade star outfielder Juan Soto, according to Washington president of baseball operations and general manager Mike Rizzo

Rizzo told The Sports Junkies on 106.7 The Fan on Wednesday that Washington plans to build around the 23-year-old slugger, who can become a free agent following the 2024 season. Soto is batting .227 with nine home runs and an .808 OPS for the Nats, who are 18-34 and aready 17 games behind the first-place Mets.

Two-time AL Cy Young Award winner Corey Kluber pitched only one inning during his only season for the Texas Rangers. The right-hander then threw a no-hitter against them last year in his only other appearance in their retractable-roof stadium.

Kluber (1-2, 4.03 ERA) is back at Globe Life Field for his third start there, this time for the Rays in the finale of a four-game series.

The pitcher who was a high school standout only a few miles from their ballpark was acquired by the Rangers in 2019 and threw a scoreless inning when finally took the mound July 26, 2020, in the season that was delayed and shortened by the pandemic. He tore a muscle in his right shoulder in the third regular-season game ever played in the stadium, and never threw another pitch for Texas.

After going to the Yankees in free agency, Kluber threw a no-hitter against the Rangers on May 19, 2021 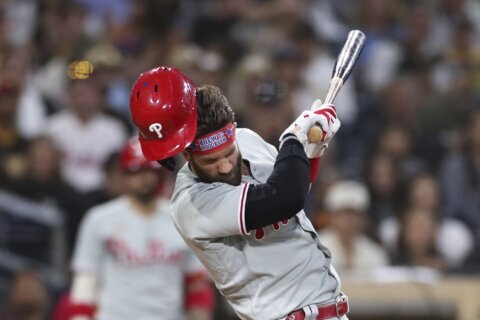 Phillies’ Harper leaves after being hit in hand by pitch 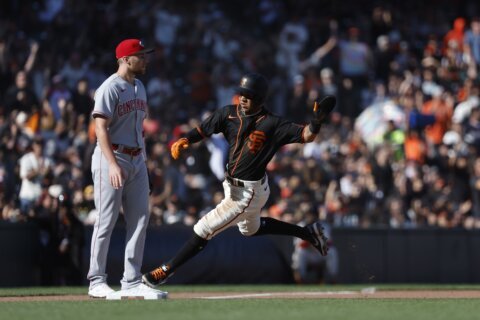