A look at what’s happening around baseball Monday:

After another slow start to the season, the reigning World Series champion Braves are surging like an October contender once again, riding an 11-game winning streak into a series at Washington.

Lance Lynn will return from the injured list and pitch for the White Sox a day earlier than planned after manager Tony La Russa shuffled his rotation in response to Michael Kopech’s injury Sunday.

Kopech left a start against Texas after 13 pitches with right knee discomfort, and La Russa ended up using Johnny Cueto — Monday’s projected starter — in relief. Kopech was optimistic he’ll return soon, and La Russa said the right-hander could be back by next Sunday.

Lynn was slated to return Tuesday but instead will take Cueto’s vacated spot for the opener of a series at Detroit. Lynn had right knee surgery during spring training and has yet to pitch this season. The 35-year-old was 11-6 with a 2.69 ERA over 28 starts last year.

Miami right-hander Sandy Alcantara tries to keep up his impressive run when he starts against the Phillies at Citizens Bank Park.

Aaron Nola (4-4, 3.50) pitches for Philadelphia, which had its nine-game winning streak end Sunday with a loss to Arizona.

Chicago got hammered 18-4 on Sunday at Yankee Stadium, and was outscored 28-5 while getting swept in a three-game series.

The Cubs fell to 4-23 overall against the Yankees, including a pair of World Series sweeps in the 1930s by New York teams starring Babe Ruth, Lou Gehrig and Joe DiMaggio. The Cubs are 0-12 in the Bronx. 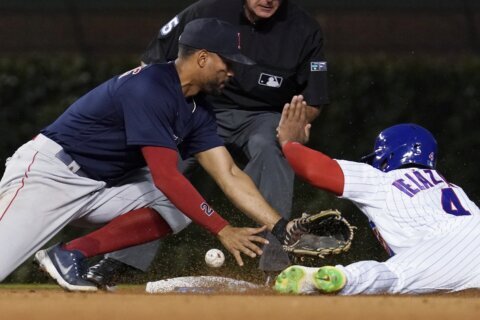