The Rays, who are tied for the second-most players on the injured list with 14, started Tuesday fourth in the AL East with a 40-32 record.

Kiermaier went 0 for 2 with a walk and played six innings of defense Tuesday in a rehab game with the rookie-level FCL Rays.

The game began at noon at the Rays’ complex in Port Charlotte, Florida, where the heat index was around 100 degrees Fahrenheit (38 Celsius).

“Today was a good test playing at Port Charlotte,” Kiermaier said under the dome at Tropicana Field before Tampa Bay hosted the Milwaukee Brewers. “It was tough holding onto my bat, so I’m looking forward to being back in the big leagues.”

Right-hander Drew Rasmussen, out since June 12 with a left hamstring strain, could rejoin the rotation this weekend.

Another starter, Luis Patiño, sidelined by a left oblique strain, has made three starts for Triple-A Durham and will make at least one more minor league appearance.

Reliever Pete Fairbanks, who hasn’t pitched this year, is set to start a rehab assignment Thursday with the FCL Rays.

Slugger Brandon Lowe has resumed taking batting practice. He has been on the IL since May 16 with a lower back injury.

“I think we’re all encouraged that he’s swinging the bat,” Tampa Bay manager Kevin Cash said. “He’s pretty pain-free. We’ll probably put a calendar together today or tomorrow, but it’s still going to be some time.” 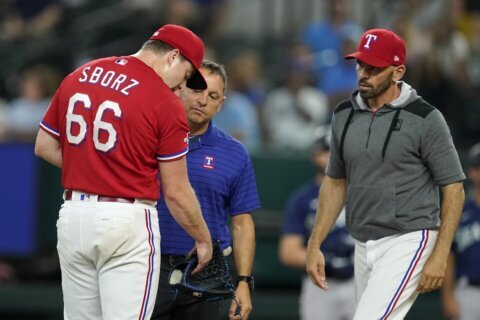