BOSTON (AP) — Shohei Ohtani left his mark on Fenway Park with the finest two-way performance since Babe Ruth himself.

Pitching at the historic ballpark for the first time, Ohtani struck out 11 in seven shutout innings and added two hits — one of them a 109 mph line drive that banged off the Green Monster so hard that it knocked his No. 17 out of the pitcher’s slot on the manual scoreboard.

“I hope you don’t start taking that for granted. Like it’s old hat,” Angels manager Joe Maddon said of Ohtani’s skills. “It’s just so unusual. It’s otherworldly, on this level of this game.”

The display came during Los Angeles’ 8-0 win over Boston Thursday that included a five-run eighth inning in the ballpark where Ruth debuted in 1914 and played six seasons before the Red Sox sold him to the Yankees.

In the fourth, Ohtani hit a 389-foot single that was about a foot shy of being a home run. In the eighth, he singled off the left-field wall to drive in one run, then scored as the Angels turned a 2-0 game into a blowout.

Ohtani (3-2) also induced 29 swings and misses from Boston batters — a career high, and the most for any pitcher this year. He threw 81 of his 99 pitches for strikes, also a career high.

“It’s one of my favorite ballparks,” said Ohtani, who has batted .302 with two homers in 10 games at Fenway. “I was looking forward to pitching here.”

Ohtani’s start was pushed back two days because of groin tightness and came about 14 hours after the Angels scored six times in the 10th inning to beat the Red Sox 10-5. As the designated hitter in that contest, Ohtani walked in the ninth and walked and scored in the 10th.

“To be honest, I was pretty fatigued,” he said. “My body was pretty tired. I tried to get to sleep as early as possible and get enough sleep and rest. I think I was able to do that.”

Jared Walsh had four RBIs, curling a two-run homer around the left-field foul pole in the seventh to break a scoreless tie. Anthony Rendon followed with an RBI single to chase Tanner Houck (2-2), and Walsh added a two-run dribbler through the shifted infield to make it 7-0.

Houck gave up seven runs on five hits and a walk, striking out four in 2 1/3 innings.

Brandon Marsh added a solo homer in the ninth.

Ohtani allowed six hits and no walks in all. He also threw a wild pitch that allowed Rafael Devers to reach base on a strikeout in the first.

Ohtani gave up a leadoff double to Jackie Bradley Jr. in the fifth. In the sixth, J.D. Martinez doubled with one out but was stranded when Andrew Velazquez made a diving catch of Franchy Cordero’s blooper to end the inning.

Ohtani was the first pitcher at Fenway to bat in the top four of the order since Ruth, who was the Red Sox’s cleanup hitter in the first game of a Sept. 20, 1919, doubleheader.

In the fourth inning, Ohtani matched another Red Sox Hall of Famer by becoming the first starting pitcher to record a hit at Fenway since Roger Clemens in 1996. Ohtani and Clemens are the only starting pitchers to record hits at Fenway in the designated hitter era.

Rich Hill pitched five shutout innings for Boston, allowing one hit and one walk while striking out six. He remains winless for the season despite allowing zero runs over 13 innings in his last three starts.

Hill retired the first nine batters in order, then walked Taylor Ward to lead off the fourth. With two outs, Ohtani lofted a high fly ball to center field that Bradley lost in the sun and the wind. It bounced off the wall abutting the Red Sox bullpen. Ward, who had to wait, scampered to third, but Ohtani was held to a single.

Ohtani fouled a ball off the inside of his right ankle in the seventh, but stayed in the game.

Angels: Return home to open a three-game series Friday against the Washington Nationals, who will pitch RHP Joan Adon (1-4). Maddon said Thursday he was not ready to announce a starter. 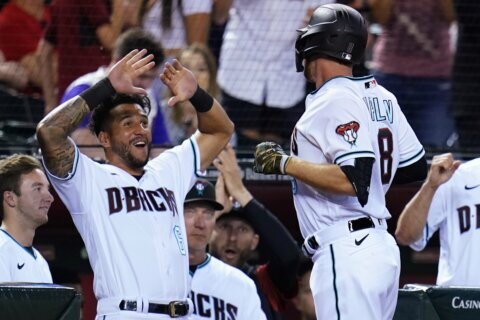 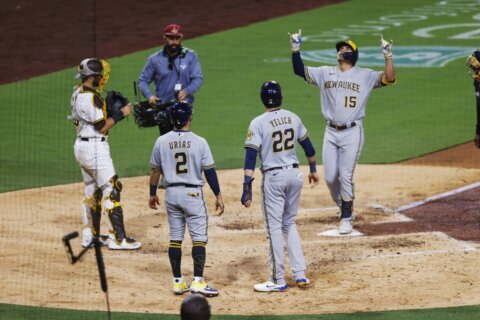 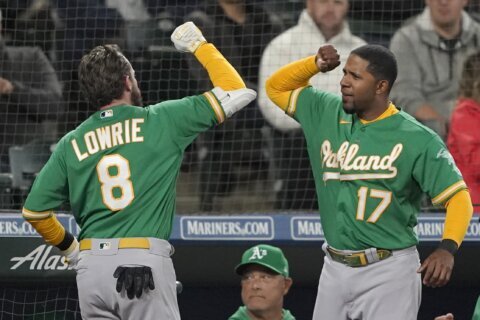