NEW YORK (AP) — New York Mets outfielder Starling Marte was placed on the bereavement list following the death of his grandmother, which came nearly two years to the day after his wife died of a heart attack.

Mets manager Buck Showalter said Tuesday that Marte’s grandmother, Ponga Brigida, died unexpectedly. Marte was raised by his grandmother in the Dominican Republic after his mother died when he was 9.

“It was heart-wrenching talking to him yesterday,” Showalter said. “I don’t think most people realize, he’s had a tough go.

“He’s home for as long as he needs to be there,” he added.

Marte can stay on the bereavement list for three to seven days after being added Monday. Showalter said the team would figure out a way to let him grieve longer if needed.

The 33-year-old Marte signed a $78 million, four-year deal with the Mets as a free agent last offseason. He is hitting .266 with three homers, five stolen bases and a .714 OPS in his first season in Queens.

New York also announced that ace Jacob deGrom had follow-up imaging Monday that showed progressive healing in the stress reaction in his right scapula. The team said he will continue to ramp up his throwing.

DeGrom has not pitched this season and has been expected to be sidelined at least until June. The Mets shifted the two-time Cy Young Award winner to the 60-day injured list last week. He went on the IL opening day, April 7, after injuring his right shoulder blade late in an abbreviated spring training.

“He’s going to move back further and throw harder, and those are good things,” general manager Billy Eppler said.

Right-hander Steve Nogosek was recalled from Triple-A Syracuse and righty Adonis Medina added as the 27th player for a doubleheader Tuesday against St. Louis. 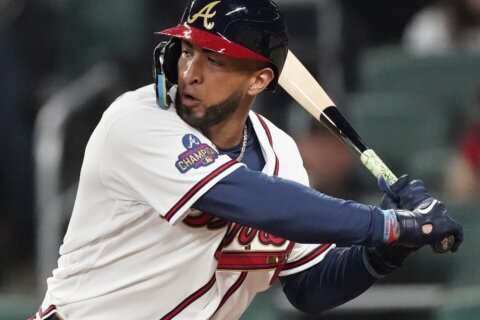