Dodgers return to form with 5-4 win over Bumgarner, D-backs

LOS ANGELES (AP) — Tony Gonsolin led the Los Angeles Dodgers back to normal by continuing to do things better than he’s ever done them.

Chris Taylor hit a two-run homer and Gonsolin pitched six innings of three-hit ball in the Dodgers’ 5-4 victory over Madison Bumgarner and the Arizona Diamondbacks on Monday night.

Mookie Betts and Freddie Freeman drove in runs during the Dodgers’ three-run fifth inning in the first of four games in roughly 48 hours between these NL West rivals. The series includes the first split doubleheader in Dodger Stadium history on Tuesday — and that means the Dodgers needed every inning Gonsolin (4-0) could give them.

Compounding the looming troubles of the doubleheader, the Dodgers’ bullpen and injury-plagued rotation already had been taxed during a rough four-game series with the Philadelphia Phillies, who totaled 33 runs and fell one strike short of a four-game sweep Sunday.

So Gonsolin struck out seven and walked two while throwing a career-high 92 pitches.

“In terms of his maturation as a big league starter, this was a defining moment,” Dodgers manager Dave Roberts said. “We needed it, and he came through big.”

Gonsolin seemingly has been on the verge of establishing himself in the Dodgers’ rotation since 2019, but his inability to string together long starts has hampered him. He had reached the sixth inning just five times in his career before this season, and he didn’t do it once in his injury-shortened 2021.

With close coaching from mentor Clayton Kershaw, Gonsolin is finally getting weak contact early in counts while throwing his breaking pitches consistently for strikes — two keys to eating up innings.

“I’ve talked with Kersh a lot on how to go deeper in the game, what works and what doesn’t work, and just trying to figure out what works for me,” Gonsolin said. “Anything to give our bullpen a break.”

Christian Walker homered early and David Peralta added a two-run shot in the ninth for the Diamondbacks, who opened an eight-game road trip with their third straight loss.

Peralta connected with one out against Craig Kimbrel, but the Dodgers’ veteran closer shook it off and finished up his sixth save.

“This team, we’ve got a good heartbeat,” Arizona manager Torey Lovullo said. “We won’t shut down.”

Bumgarner (2-2) gave up six hits and a season-high three earned runs over five innings, remaining winless against the Dodgers since September 2017. The veteran left-hander had the lowest ERA of his career through his first seven starts (1.78), and he added four more scoreless innings before Betts and Freeman came through in the fifth.

“Bum was very effective early on,” Lovullo said. “They got some momentum in that last inning, and his pitch count got up.”

Los Angeles still fell behind early by at least two runs for the sixth consecutive game, but the Dodgers made up for it in the fifth.

Betts singled to center with two runners on, and Alek Thomas badly misplayed the bouncing ball and let it roll to the wall, allowing Austin Barnes to score from first. Freeman followed with a double to left, scoring Betts.

“He’s a playmaker, and he’s trying to make a play,” Lovullo said of Thomas. “But sometimes the play is to be safe.”

Taylor homered off reliever Sean Poppen in the sixth immediately after Max Muncy led off by beating the shift with his first bunt single since 2019.

Left-hander Caleb Ferguson pitched a hitless seventh for the Dodgers in his first major league appearance since September 2020, capping his comeback from his second Tommy John surgery.

Ferguson said he felt “a lot” of nervousness, “and you could see it. Couldn’t really feel the ball in my hand. Almost felt like I was making my debut.”

Bumgarner’s loss was the first for an Arizona starter in 16 games, ending the second-longest streak in franchise history.

Diamondbacks: SS Nick Ahmed went on the injured list, but the team wouldn’t say why. It apparently isn’t a problem with his balky right shoulder. Jake Hager came up from Triple-A Reno to take his roster spot.

Dodgers: Ferguson was a solid reliever from 2018-20 before tearing an elbow ligament. He also had Tommy John surgery in high school. … Former NL MVP Cody Bellinger sat out to rest. 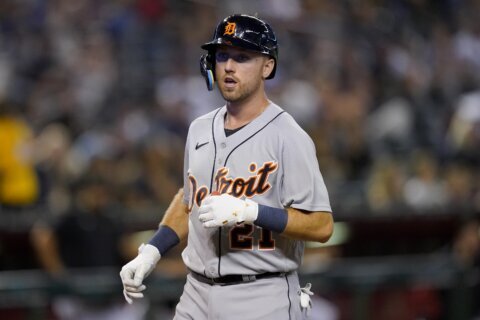