MINNEAPOLIS (AP) — Trea Turner and the Los Angeles Dodgers broke open a tie game with a six-run eighth inning, then waited out the rain to take a 7-2 victory Tuesday night in their series opener against the Minnesota Twins.

Turner, who made an error earlier that led to Minnesota’s tying run, hit an RBI single that gave the Dodgers a 2-1 lead. His line drive went under the glove of Twins third baseman Luis Arraez, who was unable to turn a potential double play.

Justin Turner followed two batters later with another RBI single, and Will Smith doubled in two runs to give Los Angeles a 5-1 cushion.

Justin Turner scored on an error by Arraez, and Gavin Lux added a run-scoring single.

Both teams then sat through an 88-minute rain delay that halted play in the bottom of the eighth with the Dodgers ahead 7-1. Play resumed at 11:31 p.m. with only a few dozen fans in the stands.

“I can only say so much because I was in the dugout with a heated vest on, but it was brutal. Cold, wet, wind swirling,” Dodgers manager Dave Roberts said. “Just to get out of it knowing you have a game in less than 12 hours, to come away with a win I think was a huge boost for us.”

With the Dodgers only in town for a two-game series, both teams seemed determined to get Tuesday’s game in, even if it meant finishing up after midnight.

“To be honest, it made sense to actually just finish the game if we could finish the game,” Twins manager Rocco Baldelli said. “I don’t think anyone was super pumped about being here at this time of the morning but I think when we can finish a ballgame, we finish it.”

Left-hander Andrew Heaney made his Dodgers debut. After struggling with the Angels and Yankees in 2021 — he was 8-9 with a combined 5.83 ERA in 30 appearances — he signed with Los Angeles during the offseason.

The 30-year-old Heaney cruised through four innings, allowing two doubles — both to Carlos Correa. But he ran into trouble in the fifth. Max Kepler led off with a double and Heaney hit Miguel Sanó with a pitch. Kepler scored on Turner’s error at shortstop, ending Heaney’s night.

“It’s a good feeling to get off to a good start,” Heaney said. “I pitched well, and hopefully keep it rolling.”

Chris Archer’s debut in a Twins uniform was brief but effective. The right-hander tossed four scoreless innings in his first start of the year. Archer allowed a pair of doubles and struck out three on 63 pitches.

Archer gave up a leadoff double to Freddie Freeman in the fourth but worked around it. After striking out Justin Turner looking, Archer hopped off the mound and pumped his fists on his way to the dugout.

“He brings a tinge of that everywhere he goes,” Baldelli said. “He shows his emotions. You can say he wears them on his sleeve a little bit.”

BASKETBALL ON THE BIG SCREEN

During the rain delay, the video screens at Target Field showed the Timberwolves-Clippers NBA game that was taking place next door at Target Center. Play resumed minutes after the Wolves took down the Clippers in the play-in game.

LHP Clayton Kershaw is set to make his season debut for the Dodgers in Wednesday’s series finale. RHP Chris Paddack gets his first start in a Twins uniform after being acquired from the Padres last week. 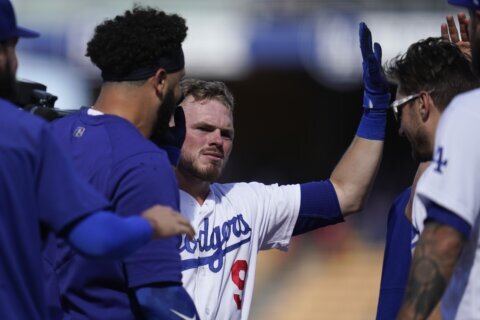 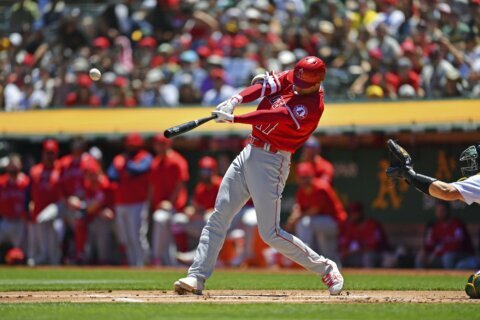