Column: Remembering Jackie Robinson in town where it started 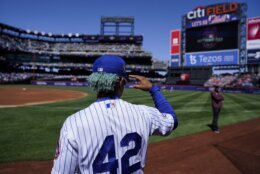 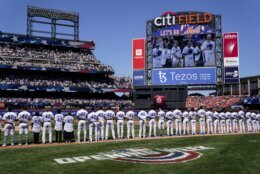 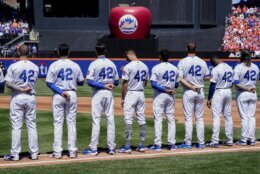 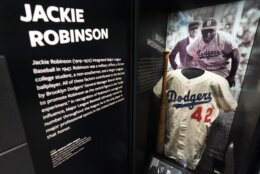 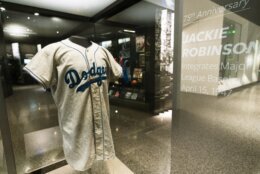 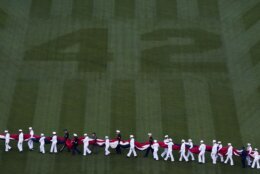 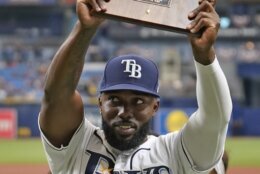 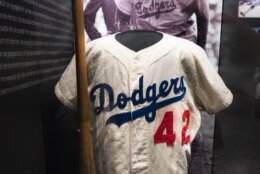 Far off the beaten path, way down in southwest Georgia near the Florida state line, a remarkable life began in the most humble of circumstances.

Jackie Robinson was born just outside the small town of Cairo (pronounced “KAY-ro”), the child of sharecroppers struggling to make ends meet in the grinding poverty of the Jim Crow South.

As Major League Baseball honors the 75th anniversary of Robinson’s historic breaking of the color barrier, let’s not forget where he came from.

Robinson spent the first year of his life near Cairo. For decades, there was nothing to mark that he was ever there — a forgotten first chapter to one of America’s most significant stories.

That has changed over the last quarter-century.

There are now a pair of historic signs honoring Robinson — one downtown in front of the library, another at the remnants of the rural shack where he was delivered by his grandmother, a midwife, on Jan. 31, 1919, less than three months after the end of World War I.

Even more significantly, the Jackie Robinson Boys & Girls Club was founded about a dozen years ago, striving to create a better life for Cairo’s young people, many of whom still face some of the same challenges that Robinson did a century ago.

Stephen Francis, the club’s director, proudly notes that it’s the only Boys & Girls Club in the entire world to bear Robinson’s name.

Its mission certainly would’ve met with his approval.

“Being named after Jackie Robinson makes us feel a little more special than the normal Boys & Girls Club,” Francis said. “But it’s also a great responsibility with what he stood for. We have to uphold that and pass it down to the children in our daily programs and the life skills that we teach. We want to make sure we’re instilling the character that Jackie Robinson stood for.”

“It’s OK to fall as long as you get back up,” Francis replied. “Failing is not falling. Failing is giving up when you fall. You’re gonna go through some things. But if something is worth it, it’s worth fighting for.”

The Jackie Robinson Boys & Girls Club was at the center of a big celebration Friday.

In a most fitting gesture, the Atlanta Braves brought their World Series championship trophy to Robinson’s birthplace on Jackie Robinson Day.

The whole town was buzzing over its appearance.

“People are cleaning their yards like the the trophy is coming to their house,” Francis said, chuckling. “They’re cutting their grass and washing their cars and getting their hair done. It’s like a big party.”

Dr. Linda Walden was among those who planned to attend the trophy celebration. She wouldn’t have missed it for the world.

Walden is a third cousin of Robinson’s. A native of Queens, she never met Robinson — who died in 1972 at age 53 — but moved to Cairo in the mid-1990s to start a much-needed medical practice in an area that played such a significant role in her family’s history.

She was stunned at what she found — or, more accurately, what she didn’t find.

No statues. No monuments. Not even a simple marker to commemorate this is where it all began for Robinson. Heck, he wasn’t even in the Georgia Sports Hall of Fame (which finally inducted him in 1998).

Maybe that was only natural since Robinson spent such a short time in Georgia. After his father left the family, his mother packed up Jackie and his four siblings and moved to Pasadena, California in search of a better life.

Even so, Walden has dedicated much of her life outside of medicine to making sure that Cairo is remembered for more than its famous syrup.

She now owns the site where Robinson was born. A fence protects the grounds, though all that is left is a brick chimney. The abandoned structure burned down long ago.

Walden also had a historic marker installed, which sadly became a symbol of just how far we have to go in this country. Vandals damaged the plaque with gunshots. She suspects it was the work of racists who were none too pleased with the progress that Robinson fought for throughout his all-too-short life.

“I’m gonna let God handle all that and take care of whoever did it. He has his ways to dealing with people,” Walden said. “But it’s really disappointing that people would show the ugly face of racism that still exists. I just pray for those people.”

Fortunately, the nasty part of the story takes a more promising turn. MLB made a $40,000 donation that got the ball rolling to install not one, but two replacement markers. One at the library, where more people in the town of roughly 10,000 would be able to see it, and another at the birthplace outside the city limits.

A dedication ceremony for the new plaques was held in January.

“I’m very proud,” said Walden, who still gets emotional every time she talks about her distant relative. “This means his legacy will continue. Those signs represent the man and the resilience of Jackie Robinson. They’re a symbol of hope, a symbol of courage, a symbol of confidence and determination, a symbol of excellence. No matter what, we can achieve.”

The damaged sign, meanwhile, was shipped to the Negro Leagues Baseball Museum in Kansas City. Missouri, which held its own event Friday to unveil the marker “as a reminder that the ugliness of America’s past persists to this day.”

It will remain on temporary display through mid-August, said Raymond Doswell, the museum’s vice president and curator. Then it will become part of a permanent exhibit.

“We’re not going to try to repair it,” he said. “We want to show people his humble origins, and at the same time show with the damaged marker that the fight against racism and violence continues.

We’d like to see MLB take another big step to honor Robinson’s legacy.

Bring a real big league game to the town where it all started.

Already, MLB has constructed a pair of temporary stadiums to host a one-off game at the Fort Bragg military base in 2016 and the wildly popular “Field of Dreams” game in Iowa that will have an encore in 2022.

How about a “Jackie Robinson Day” game in Cairo next April 15 between the home-state Braves and the Los Angeles Dodgers, the team that Robinson played his entire big league career for while they were in Brooklyn?

The Braves could wear replica uniforms from the Atlanta Black Crackers, the city’s Negro Leagues team. The Dodgers could don the caps they wore during the Robinson era, adorned with a “B” rather than “LA.”

Walden has long dreamed of raising funds to build a field that could host big league teams in Cairo. This seems like a perfect opportunity for MLB to step up again to honor its most significant ballplayer and, hopefully, boost waning interest in the national pastime among Black Americans.

If a fictional movie is worthy of a special game, Jackie Robinson most certainly is, too.