ANGELS OUT OF THE OUTFIELD

Mike Trout is likely done for the year. Same for Jo Adell, another talented outfielder for the Los Angeles Angels.

Manager Joe Maddon said Wednesday he would be very surprised if Trout played again this season. The three-time AL MVP injured his right calf running the bases May 17 and had a setback last month, but he has left open the possibility of returning this year.

Adell was placed on the 10-day injured list after he got hurt when he crashed into the wall in left while trying to catch Garrett Stubbs’ RBI double in the ninth inning of the Angels’ 4-2 win at Houston on Saturday night. He hit the back of his head on the wall on the play, but the team said he had a left abdominal strain.

The Tigers won’t play into October, but they’ve been giving postseason hopefuls a handful recently. Detroit took two of three from AL East-leading Tampa Bay over the weekend and swept a two-game series against the likely NL Central champion Brewers this week. The Tigers start up a four-game set at the Rays a day after improving to 70-76 — the first time the franchise has reached 70 wins since going 86-75 in 2016.

“We’ve played a pretty good brand of baseball for a while,” Detroit manager A.J. Hinch said. “… We obviously played pretty well this week and answered some challenges against a really good pitching staff.”

The AL West-leading Astros will be minus outfielder Michael Brantley through the weekend after putting him on the injured list because of soreness in his right knee.

Brantley made an early exit Saturday and hasn’t played since then. The 34-year-old is hitting .315 with eight home runs and 45 RBIs. He was picked this season for his fifth All-Star team.

“It’s not worse, we just didn’t think he was going to be ready to be 100% by the weekend,” manager Dusty Baker said. “We’re trying to get him back to 100% so we can make this stretch drive and hopefully into the playoffs.”

Brantley was sidelined for a dozen games in late May and early June because of a problem with his right hamstring.

Kevin Gausman tries to build on his impressive season when he starts for the playoff-bound Giants at Oracle Park against San Diego.

Gausman (14-5, 2.65 ERA) is 5-0 in his last eight starts for the NL West leaders. Part of his success during that streak has come from keeping the ball in the park — he’s given up home runs in just two of those games.

The 30-year-old righty was a first-time All-Star this season. The Padres are in a five-team race for the second NL wild-card spot. 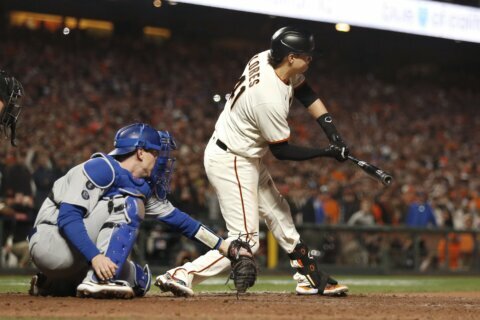