CLEVELAND (AP) — While riding his bike over a bridge across the Cuyahoga River near Progressive Field, Indians owner Paul Dolan rarely paid much attention to the eight giant stone figures that seem to guard the city.

They have new meaning,

After more than 100 years, Cleveland’s Major League Baseball team is getting a new name — Guardians.

The Indians are going, going, soon to be gone.

The ballclub announced Friday that at the end of the 2021 season, the Indians will transition from the name they’ve been known as since 1915 and replace it with Guardians, one they hope inspires a new generation of fans.

The name change, which has its supporters and critics among Cleveland’s fan base, ends months of internal discussions triggered by a national reckoning for institutions and teams to drop logos and names considered racist.

“We do feel like we’re doing the right thing and that’s what’s driving this,” Dolan said following a news conference at the ballpark. “I know some people disagree, but if anything I’ve gotten more and more comfortable that we’re headed in the right direction.

“And actually, the selection of the name solidifies that feeling because of the values that the name represents.”

The organization spent most of the past year whittling down a list of potential names that was at nearly 1,200. It was a tedious process, which included 140 hours of interviews with fans, community leaders, front office personnel and a survey of 40,000 fans.

Dolan has said last summer’s social unrest, touched off by the killing of George Floyd in Minneapolis, spurred his intention to change the name — a move that came a few years after the Indians stopped wearing the Chief Wahoo logo on their game jerseys and caps.

Cleveland’s new name was inspired by the large landmark stone edifices — referred to as traffic guardians — that flank both ends of the Hope Memorial Bridge, which connects downtown to Ohio City.

As the team moved closer to making a final decision on the name, Dolan said he found himself looking closely at the huge art deco sculptures.

“Frankly, I hadn’t studied them that closely until we started talking about them and I should emphasize, we’re not named after the bridge, but there’s no question that it’s a strong nod to those and what they mean to the community,” he said.

The team did not reveal the names of any of the other finalists, but Brian Barren, Cleveland’s president of business operations, said trademarking issues eliminated several potential candidates.

In the end, the team felt Guardians was a perfect fit.

“We think Guardians is unique and authentic to Cleveland,” Barren said. “It’s less about the Guardians of Traffic and more about what the Guardians represent and that idea of protection. For us and our research, Cleveland folks are very protective of one another.

Cleveland’s name change comes as the Washington Football Team continues to work toward a similar makeover. The franchise dropped its contentious Redskins name before the 2020 season and recently said it will reveal a new name and logo in 2022.

While dropping Indians, Cleveland will keep its red, white and navy team colors and the Guardians’ logos will incorporate some of the team’s lettering style on past uniforms as well as architectural features found on the bridge.

Numerous Native American groups have protested Cleveland’s use of the Wahoo logo and Indians name for years, so the latest development brought some comfort.

“It is a major step towards righting the wrongs committed against Native peoples, and is one step towards justice,” said Crystal Echo Hawk, executive director and founder of IllumiNative, a group dedicated to fighting misrepresentations of Native Americans.

The name change has sparked lively debate among the city’s passionate sports fans. Other names, including the Spiders, which is what the team was called before 1900, were pushed by supporters on social media platforms.

Dolan knows there’s a portion of Cleveland’s fan base that may never accept the change.

“I’m 63 years old, and they’ve been the Indians since I was aware of them, probably since I was 4 or 5 years old, so it will take a long time,” he said. “But we’re not asking anybody to give up their memories or the history of the franchise that will always be there. And for people my age and older, most our life is going to be living as an Indian and not as a Guardian.”

Manager Terry Francona’s ties to the ballclub run deep. His father, Tito, played for the Indians in the 1960s.

As a stirring video narrated by Oscar-winning actor — and die-hard Indians fan — Tom Hanks was shown to kick off the news conference, Francona moved his seat closer to get a better view.

Francona, who is in his ninth season as Cleveland’s on-field leader, planned to show the video to his players before Friday’s game. Francona has gotten some negative backlash about the change, but feels the team is doing it for the right reasons.

“What’s important is how people that are different — not less, just different — how they feel about this,” he said. “We’re trying to be respectful and trying to be unified. And change is not always easy, I get it, it doesn’t happen overnight.” 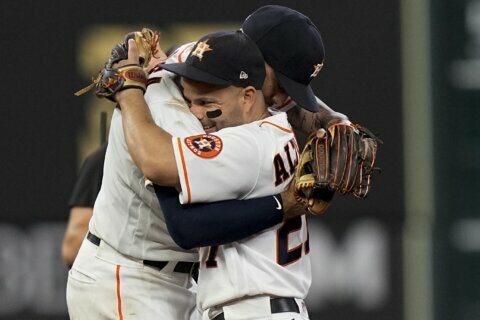 Dynamic duo: Altuve, Correa both get top billing for Astros