MINNEAPOLIS (AP) — Miguel Cabrera hit a run-scoring single in the 11th inning after Eric Haase tied the game with a grand slam with one out in the top of the ninth as the Detroit Tigers beat the Minnesota Twins 6-5 on Tuesday night.

The Tigers tied the score with a homer in the ninth inning for the second straight game. Robbie Grossman, who singled to start the ninth-inning comeback, hit a two-run homer on Monday night before Minnesota won 6-5 in 10 innings.

“Pretty awesome, just to walk away with a ‘W’ is huge,” Haase said. “We’ve been in every single one of these games. It’s come down to the last inning multiple times and we just couldn’t get over that hump, couldn’t finish the game. Miggy had a huge single right there. Coming in just lights out, out of the bullpen awesome.”

José Cisnero (2-4) got out of a 10th inning jam to earn the win for the Tigers, who snapped a four-game losing streak. Daniel Norris notched his first career save after stranding Willians Astudillo at third base in the 11th.

Haase had struck out twice and grounded into a double play before hitting his first career grand slam and the 17th homer of his first full major league season.

“Storybook season as the hometown kid continues,” Detroit manager A.J. Hinch said of Haase, who was born in Detroit and went to Divine Child high school in Dearborn, Michigan. “Really, an uplifting swing for us. We were pretty beaten up a little bit in this game and never really felt like we were doing much to get back into it until that ninth.”

Jorge Alcala (2-5) allowed Cabrera’s single and took the loss in 1 1/3 innings of relief on a hot, humid night in Minnesota.

The first-pitch temperature was 91 degrees, and the humidity added to the unpleasantness with an excessive heat warning in effect in the area.

Mitch Garver gave the Twins a 4-0 lead just four batters into the game on Tuesday night with his first career grand slam. He left the game in the 10th after being hit in the right wrist by a pitch from Cisnero. Twins manager Rocco Baldelli said Garver has a hand contusion and X-rays were negative.

“It doesn’t get too much more difficult than that,” Baldelli said. “These are games that we had opportunities to do it in a much cleaner fashion. The loss today, it stings a lot.”

According to Stats Perform, Garver and Haase are the first opposing catchers to hit grand slams in the same game in MLB history.

According to the Elias Sports Bureau, the Tigers have hit game-tying, ninth-inning homers in back-to-back games for the first time since Aug. 30-31, 1957.

Since coming off the injured list on July 19, Garver is 5 for 14 with two doubles, three homers and seven RBI. The 2019 Silver Slugger-winning catcher has five homers in his last 16 games.

ONE THAT GOT AWAY

Rookie Akil Baddoo also homered for Detroit. The former Twins draft pick who was acquired in the Rule 5 draft in December, Baddoo is hitting .326 with three homers and 13 RBIs in 12 games against Minnesota this season.

Tigers: RHP Michael Fulmer was reinstated from the 10-day injured list before the game and LHP Ian Krol was designated for assignment. Fulmer, who has been out since June 27 with a right cervical spine strain, pitched a scoreless inning on Tuesday. … LHP Matthew Boyd (left arm discomfort) is expected to throw off a mound this weekend at the team’s facility in Lakeland, Florida. Hinch said Boyd’s progress is encouraging. … RHP José Ureña (right groin strain) has thrown on flat ground, but has not advanced to throwing off a mound. Hinch said he’s “a ways away.”

Twins: LHP Taylor Rogers was placed on the 10-day injured list with a left middle finger sprain sustained in Monday night’s game. Rogers, the main option to save games for Minnesota, will have a second and, possibly, third opinion on the finger, according to Baldelli. The Twins recalled RHP Beau Burrows from Triple-A St. Paul. 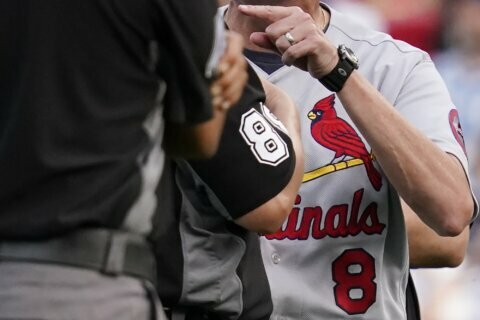 Braves, Phillies to go head to head with division in balance