CORONAVIRUS NEWS: Prince George's Co. vaccine update | US to spend $3.2B on treatments | How many vaccinated in DMV?
Home » MLB News » García beats Astros in…

It was the second game-ending hit in the 10th in the three-game series for García after a three-run homer in the opener. He also went deep twice during Saturday’s 8-4 victory.

The series was a strong response by the Rangers to a 1-9 stretch that included a four-game sweep by the Astros last weekend in Houston.

Solak took third on Nate Lowe’s groundout and scored on García’s hard grounder up the middle with the infield in. Jose Altuve made a diving stop, but the second baseman’s desperation throw didn’t get near home plate.

“He’s real fun to watch, this stretch that he’s on, but all the time, he’s a fun player to watch,” Solak said of García. “Every time he steps into the box, you’d better be ready for something cool to happen.”

Houston manager Dusty Baker said the club considered intentionally walking García, who had eight RBIs in the series, but thought closer Ryan Pressly’s stuff was good enough to retire the 28-year-old Cuban rookie for the fifth time in the game.

“He jammed the heck out of him,” Baker said. “He just found a hole. You can’t make a better pitch than he made.”

After giving up Altuve’s second single to put runners at the corners with no outs in the top of the 10th, John King (5-3) retired Carlos Correa on a foul pop, struck out Alex Bregman and got Michael Brantley on a flyout.

Pressly (2-1) was on for a second inning after pitching a perfect ninth.

Mike Foltynewicz pitched seven scoreless innings but missed out on his first win in almost a month when the Texas bullpen couldn’t protect an eighth-inning lead for the second time in the series.

Altuve’s single in the eighth was one of three off Josh Sborz to load the bases. It also extended the longest hitting streak in the majors this season to 17 games.

Lefty Brett Martin replaced Sborz, and his first pitch to Brantley went to the backstop, allowing Jason Castro to score Houston’s first run. Brantley’s grounder got the Astros even at 2-2.

Neither team had a hit until the fourth inning, and it was scoreless in the fifth when Astros starter Cristian Javier walked three straight batters with one out to give the right-hander a career-high six.

After Javier struck out Solak, Baker went to Brooks Raley for a lefty-lefty matchup with Nate Lowe. A full-count slider just off the plate brought in Brock Holt.

Solak hit an RBI double in the seventh for a 2-0 Texas lead.

Foltynewicz allowed three hits. Javier gave up just one hit in 4 2/3 innings — Lowe’s one-out single in the fourth — and struck out five.

The Rangers, the first pro sports team to fill their stadium in the pandemic when they drew nearly 40,000 for their home opener in early April, had three straight crowds of at least 30,000 for the first time at year-old Globe Life Field. Including a Saturday sellout, the three-game series drew an average of 34,981.

Houston slugger Yordan Álvarez was out of the starting lineup because Baker said he was “a little bit lost right now.” Álvarez struck out as a pinch hitter in the ninth inning, giving him nine strikeouts in a 3-for-22 slide.

Although García was 0 for 4 before his game-winning hit, the rising star with the nickname “El Bombi” had a hit taken away in the seventh when his 92 mph liner was snagged by reliever Bryan Abreu, who easily caught Solak off second base for an inning-ending double play.

Rangers: RHP Hunter Wood could be headed to the injured list after leaving Saturday’s game with right elbow tightness, but not before Tuesday. The Rangers went one pitcher short Sunday.

Astros: RHP Zack Greinke (4-1, 3.77 ERA) is set for Tuesday’s opener of a two-game series at home against the Dodgers. The Astros are scheduled to face Clayton Kershaw (Tuesday) and Trevor Bauer (Wednesday).

Rangers: LHP Hyeon-Jong Yang (0-1, 3.38 ERA) is set for his third career start in the majors Tuesday at the Los Angeles Angels. Texas has a six-game road losing streak. 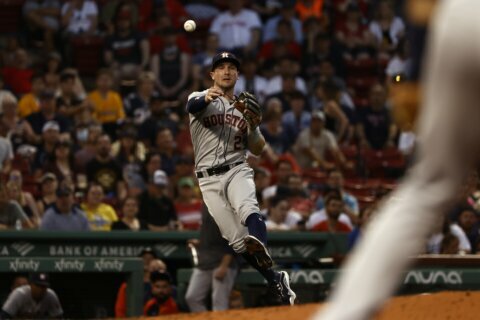 Houston 3B Bregman placed on injured list with quad strain