Brewers’ Yelich back on injured list, 1 day after returning

PHILADELPHIA (AP) — Milwaukee Brewers outfielder Christian Yelich is going back on the injured list just one day after getting activated.

The Brewers announced Tuesday that Yelich was returning to the IL due to the lower back strain that has bothered the 2018 NL MVP for the last three weeks. The Brewers recalled outfielder Tyrone Taylor from Triple-A Nashville.

“I’m just not where I need to be to go out there on an everyday basis and compete in a Major League Baseball game,” Yelich said before the Brewers played Tuesday night at Philadelphia.

“I wasn’t where I needed to be yesterday. It just wasn’t good. I was able to make it through the game, but being able to stack them on top of each other health-wise and being able to play a certain level, it just wasn’t there. That’s pretty much why we’re back to where we are,” he said.

Yelich went 2 for 4 on Monday night at Phiadelphia in his first game since April 11. He is batting .353 with a .463 on-base percentage, no homers and one RBI in just 10 games.

Counsell said nothing happened Monday that made Yelich’s situation worse, but the experience helped them realize the star outfielder wasn’t ready to play on a daily basis. Counsell said Yelich “kind of gutted out” Monday’s game.

The back problem caused Yelich to undergo an MRI in late April. Counsell said the MRI showed no structural damage.

“I don’t really want to go too far into the specifics of what’s really going on, but I definitely think that it’s something we need to look at and get a hold on and see what we can do going forward in the future to either get a hold on it or at least have some sort of understanding on how to keep it at bay a little bit,” Yelich said.

Taylor has capitalized on his opportunity while Yelich has been hurt. The 27-year-old is batting .323 with a .400 on-base percentage, two homers, seven RBIs and a .981 OPS in 16 games. 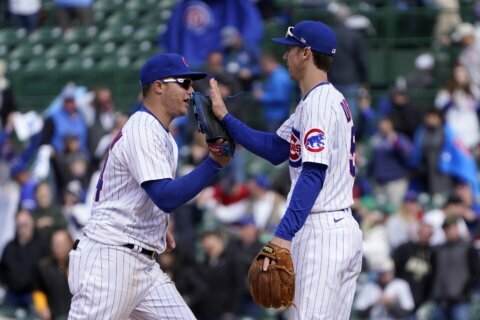