Ynoa (1-1) allowed only two runs on two hits in six innings. The right-hander led 3-0 before giving up a two-run homer to Carson Kelly in the fifth.

Ynoa’s night to remember also included his first two career hits and his first RBI. The 22-year-old pitcher from the Dominican Republic doubled to left field off Luke Weaver (1-2) in the third inning for his first hit and added a run-scoring single in the fourth.

“Truth be told, I think my last hit was probably Little League,” Ynoa said through a translator. “It’s been quite a while.”

Ynoa’s teammates were at least as surprised to see the young pitcher have success at the plate.

“A couple of people were like, ‘Is he going to be in the lineup tomorrow?’” Riley said. “That was encouraging for him to get his first win, and to get two knocks was just icing on the cake.”

Josh Rojas drove home a run in the seventh with a double off Luke Jackson that cut Atlanta’s lead to 4-3. Tyler Matzek struck out pinch-hitter Andrew Young with runners on second and third to end the inning.

Albies added to the lead with his homer off Yoan López in the seventh. The Diamondbacks pulled to 5-4 with a run in the eighth. Pavin Smith doubled and scored from third on Matzek’s wild pitch.

Will Smith pitched a perfect ninth for his fourth save.

“On a night we were a little thin in the bullpen, I thought we did a good job of giving ourselves a chance,” Diamondbacks manager Torey Lovullo said. “It was a good game. … We had a chance all the way up until the final out.”

Riley’s two-run homer in the second was his second in two at-bats. He also homered in his last at-bat in a 4-1 win at the New York Yankees on Wednesday night.

Dansby Swanson drove in Marcell Ozuna with a triple in the fifth.

Braves right fielder Ronald Acuña Jr. was held without a hit in his return after missing a two-game series at the New York Yankees with a mild abdominal strain.

Diamondbacks: Lovullo said the team “dodged a bullet” when a ball hit by Cincinnati’s Tyler Naquin in the 10th inning on Thursday hit RHP Stefan Crichton’s right hand. Crichton left the game but X-rays were negative. Lovullo said Crichton “felt great” after he played catch before Friday night’s game. … RHP Matt Peacock was recalled and RHP Riley Smith, who had a 4.15 ERA in four games, including one start, was optioned to the alternate training site. … Lovullo said SS Nick Ahmed, hitting .075 (3 for 40), was rested to “give him a chance to work on a couple things and see what he can do tomorrow.” Ahmed grounded out to Will Smith as a pinch-hitter to end the game.

Braves: OF Cristian Pache (left groin) played in an intrasquad game at the alternate training site. … RHP Chris Martin (right shoulder inflammation) and LHP Max Fried (right hamstring) have played catch but have not thrown from a mound since landing on the 10-day IL.

A young fan wearing glasses and a baseball glove caught Riley’s foul ball in the fourth inning while sitting in the first row near the right field line. He made the catch even though Diamondbacks right fielder Kole Calhoun’s glove was inches away. The fan was not guilty of interference since the ball would have landed in the seats, and he earned a fist bump from a smiling Calhoun.

The attendance was 19,258 as the Braves increased capacity to about 50% after allowing about one-third of the Truist Park seats to be filled during the first homestand.

Braves LHP Drew Smyly, on the 10-day injured list with left forearm inflammation, is expected to be activated for Saturday night’s start against Arizona LHP Madison Bumgarner. Smyly has a 5.73 ERA in his first two starts for Atlanta. Bumgarner is 1-2 with an 8.68 ERA. 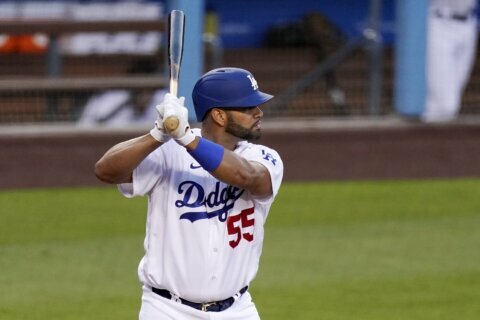 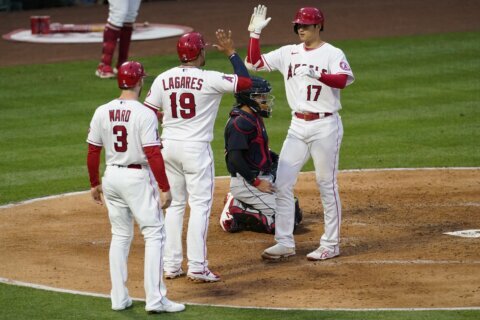