Rangers will have vets Kennedy, Bush in backend of bullpen

ARLINGTON, Texas (AP) — Veteran pitchers Ian Kennedy and Matt Bush will break from the Texas Rangers spring training camp as top options in the back end of the bullpen.

The 36-year-old Kennedy went to camp on a minor league deal after playing for four different teams over 14 big league seasons. Bush has had surgery twice on his right elbow since his last big league appearance in 2018.

Manager Chris Woodward didn’t specify their exact roles yet, but said Sunday that both were officially on the team. He said they fit nicely in the role of pitching late innings since they have done it before.

One-time closer José Leclerc and Jonathan Hernandez, who had a breakthrough season last year, will both miss the start of this season with potential long-term elbow issues.

The 35-year-old Bush was the 2004 No. 1 overall draft pick as a shortstop whose career was derailed by alcohol abuse before a big league debut as a reliever with Texas in 2016. The hard-throwing right-hander saved 11 games in a three-year stint. He suffered a partial tear of the ulnar collateral ligament in his elbow in 2018.

Kennedy spent the past five seasons with Kansas City, where he made the transition from starter to reliever the past two years and was a teammate with new Rangers general manager Chris Young. Kennedy had 30 MLB saves in 2019, then was limited to one start and 14 relief appearances last season because of a left calf injury.

Hernandez was 5-1 with a 2.90 ERA in 27 appearances in the pandemic-shortened, 60-game season last year. He had 31 strikeouts and eight walks in 31 innings, relying heavily on a sinker that averaged nearly 98 mph.

Leclerc began the 2019 season as the Texas closer before he was demoted after a rough opening month. He made only two appearances before getting sidelined for the rest of the 60-game season by a shoulder injury. 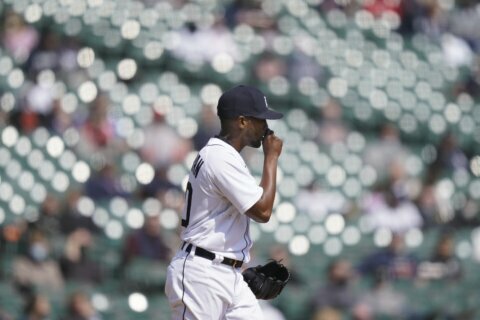