Freeland sidelined at least a month with strained shoulder

The Colorado Rockies were fearing the worst when left-hander Kyle Freeland bent down after tossing a pitch in an exhibition…
Listen now to WTOP News WTOP.com | Alexa | Google Home | WTOP App | 103.5 FM

The Colorado Rockies were fearing the worst when left-hander Kyle Freeland bent down after tossing a pitch in an exhibition game and grabbed his shoulder.

So it was promising news Thursday when an MRI revealed no further damage than a strain in his pitching shoulder, which will sideline him for at least a month. Freeland will start the season on the injured list, but he could be back in the rotation a lot sooner than initially anticipated.

“The findings showed that based on the degree of the strain, it looked pretty promising for Kyle here moving forward,” Rockies manager Bud Black said. “The doctors are pretty convinced that there is a strain but he will overcome this and be pitching this season and hopefully again within a timetable that gives him a lot of starts as we get into hopefully May.

“Again, we just don’t know. But they’re encouraged by it.”

On Tuesday, Freeland threw a pitch to start the third inning and then immediately walked to the side of the mound. He buckled in discomfort, dropped his glove and grabbed just underneath his shoulder. The scene hit Black hard.

“You feel sick,” he said. “Anytime you see that type of reaction from a player, and a pitcher grabbing his arm, you think worst-case scenario.”

Freeland’s mood was instantly lifted by the MRI report from the medical team.

“He exhaled some,” Black said. “He’s ready to start rehabbing right away. He had treatment today, some light stretching and he’s moving it around. I saw him — he had an ice pack on his shoulder. Just got to let the injury quiet down. Then, from there you can pick up the strengthening and the therapy.”

The candidates to take his place in the rotation are Chi Chi González, Dereck Rodríguez and Ryan Rolison. Black is still working out a plan ahead of the season opener on April 1 at Coors Field against the Los Angeles Dodgers.

In addition, the Rockies caught a break with righty Jon Gray, who took a liner off his pitching hand during a game Wednesday. Black said the ball glanced off Gray’s glove, which took some of the steam off of it. It did catch Gray on the side of the palm and on the wrist.

In other injury news, infielder Brendan Rodgers has been making steady progress from a right hamstring injury. Rodgers has been riding the stationary bike and playing catch with no pain. He soon will resume taking ground balls and hitting in the batting cage. 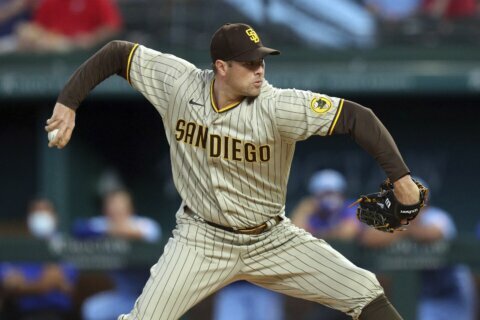