Franchy Cordero is a proud member of the Big Papi generation, growing up in the Dominican Republic watching Dominican stars like David Ortiz lead the Red Sox to the 2004 World Series title.

“Those are the games that were always on: Boston Red Sox games,” Cordero told reporters in a video call from spring training Saturday. “I grew up a big David Ortiz fan. Manny Ramirez, Pedro Martinez, even J.D. Drew — those are guys I really liked watching when I was a kid. It was always fun to be able to see all the championships that were won in my youth.”

So when Cordero was traded to Boston this winter, any disappointment he might have had about relocating were erased by the thrill of joining his favorite team.

“I’m really excited about the opportunity that I have here,” said Cordero, who was in a deal that sent Andrew Benintendi to the Kansas City Royals. “Actually being able to put on this uniform and being able to play on that field is a dream come true.”

A 6-foot-3, 220-pound outfielder who says he modeled his game after Ortiz, Cordero spent three years with the Padres before he was traded to the Royals in advance of the pandemic-delayed 2020 season. In all, he has a .236 average with 12 homers and 36 RBIs in 95 games, spending more time on the injury list with problems in his right elbow, forearm, wrist and hand than he has on an active major league roster.

“I haven’t been on the field long enough. I haven’t been able to put a full season together,” Cordero said. “God willing, people will see the real Franchy Cordero this year.”

But that goal hit a setback when Cordero tested positive for COVID-19 before boarding a plane to spring training. Although he said he still hoped to be ready for opening day, manager Alex Cora sounded less optimistic.

“There’s always a chance,” Cora said. “But we’ve got to be very careful with how we push him because his health is more important than making the opening-day roster.”

Cordero said he never had any COVID-19 symptoms, but the time in isolation set back his preparations. After reporting to the team’s complex in Fort Myers, Florida, this week, he has been working on his mobility and keeping his muscles loose.

“All the protocols we have in place when it comes to returning, it’s all about safety,” Cordero said. “It’s frustrating, but I am glad to be here now.”

Cora said Cordero is behind on his cardio work but otherwise looks good.

“Honestly, from my end I thought he was going to be more behind, but that wasn’t the case,” the manager said. “Seems like he didn’t lose too much physically. … He’s that good of an athlete. Wait till you seen him: It’s impressive.”

Hunter Renfroe homered, and Martín Pérez struck out five in four scoreless innings for the Red Sox on Saturday when they beat the Atlanta Braves 7-2. Michael Gettys hit a grand slam, and Xander Bogaerts had an RBI double for his first hit of the spring.

Bogaerts was in the lineup as the designated hitter as the team eases him back from a sore shoulder. To make space in the lineup for recovering players who aren’t ready to play the field, regular DH J.D. Martinez will play the outfield Sunday.

Cordero, who batted in a simulated game Saturday, could get into a regular spring training game as DH next week.

“We’ve got to make sure, defensively, we take care of him,” Cora said. “Running the bases, the same way.” 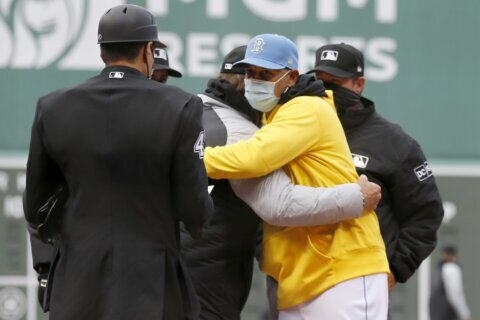 Cora says some Red Sox players getting vaccine at Fenway