Ramos played 45 games last season with the New York Mets, hitting .239 with five home runs and 15 RBIs. Ramos was an All-Star in 2016 for the Washington Nationals and in 2018 with the Tampa Bay Rays.

The 33-year-old Ramos could give Detroit a boost after its catchers struggled last year. Jake Rogers hit .125 in 35 games, and Grayson Greiner batted .118 in 18 games. Austin Romine hit .238 but agreed to a deal with the Chicago Cubs recently.

“Adding a reliable veteran catcher was one of our priorities this offseason, and we know that Wilson will be a great fit for that role,” general manager Al Avila said. “He’s still producing on the field at a high level after 11 years in the big leagues, and we feel his presence in the clubhouse will be a major positive both for our young catchers and pitching staff.”

Detroit is trying to rebuild around pitching prospects like Casey Mize and Tarik Skubal.

“I’m excited to join this team during such at exciting time,” Ramos said. “Whether it’s playing in a lineup with Miguel Cabrera or working with a really talented group of young pitchers, this was an opportunity that I was excited to take on.” 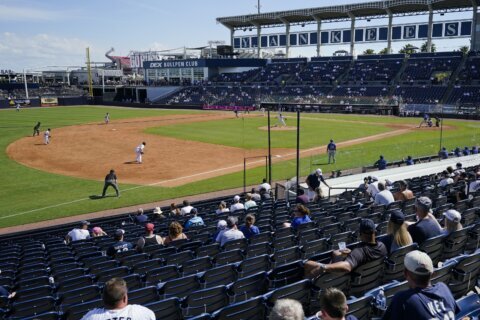 Having a ball: Judge, Yankees glad to see some seats filled