HOUSTON (AP) — An erroneous report saying Michael Brantley had agreed to a contract with the Toronto Blue Jays had the outfielder fielding goodbye texts from his Houston Astros teammates most of Wednesday morning.

By the afternoon those same teammates were sending him notes of congratulations and welcoming him back after he agreed to a $32 million, two-year contract with the Astros. He will earn salaries of $16 million annually.

“There were a lot of a lot of mixed emotions, obviously, in a small timeframe,” Brantley said Monday. “But I got a lot of great texts and I’m excited to be back, and a lot of my teammates reached out to me and they’re excited that I’m coming back. So it means the world to me.”

While Brantley never had a deal in place with Toronto, he admitted he was in discussions with the team.

“We were close,” he said. “Obviously we were in talks and there was interest on both sides, but… everything worked for where I wanted to be.”

Houston general manager James Click said the team had been in conversations with Brantley for months, but negotiations heated up when the Astros learned the Blue Jays also were pursuing him. The Astros had already lost George Springer to the Blue Jays a day before when he signed a $150 million, six-year contract, and they couldn’t afford to lose another starting outfielder.

“I don’t know if there’s any substitute for the feeling that something might might be going away to really make you focus on how much you value something,” Click said. “And so I think it’s impossible to say that it didn’t on some level spur us on.”

Brantley spent the last two years in Houston after playing for Cleveland for his first 10 MLB seasons. Brantley hit .300 with five homers and 22 RBIs in 46 games in last year’s pandemic-shortened season. He had three home runs and 11 RBIs in 13 playoff games last year as the Astros came a win shy of reaching the World Series for the second straight season.

Brantley and Springer are close friends and he said he’ll miss playing with the center fielder next season. But Brantley decided that he’d rather stay in Houston and chase a title after coming up short in his first two seasons with the team.

“Having the run the last two years that we did and having the player relationships that I did, I really wanted to come back here and to kind of finish this thing off,” Brantley said. “We have … unfinished business.”

Brantley, who is primarily a left fielder, is looking forward to playing defense again this season after serving as the team’s designated hitter last year after 2019 AL Rookie of the Year Yordan Álvarez had season-ending knee surgery. Brantley played just 19 of his 46 games in the outfield last season after starting 123 of his 148 games in the outfield in his first year with the Astros.

Click is relieved that he was able to bring back Brantley and believes the 33-year-old will be an important veteran presence on a team that has gotten significantly younger in the last year.

“Michael is as valuable to this franchise off the field as he is on it in terms of the leadership that he brings in the clubhouse,” Click said. “And in terms of who he is as a person, you can’t put a put a finger on that. So having him back, I think does a does a real good thing for our lineup. But even more, it does real great thing for our clubhouse.” 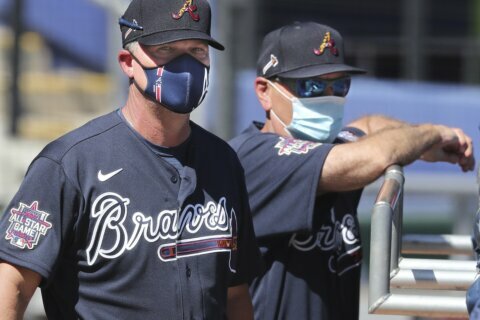 3 MLB players positive for COVID-19 in past week