JERUSALEM (AP) — Israel’s prime minister on Wednesday said no one would “dictate our open-fire policies,” appearing to reject U.S. calls for Israel to review its rules of engagement following the shooting death of a prominent journalist.

The State Department has said it will press Israel to review its policies after the death of Al Jazeera journalist Shireen Abu Akleh in May. The U.S. and Israel have separately concluded she was likely shot by an Israeli soldier by mistake during a gun-battle with Palestinians, despite video footage showing there were no militants or clashes in her immediate vicinity at the time.

Prime Minister Yair Lapid, speaking at a naval base, expressed sorrow over her death but appeared to rule out any prosecutions or any changes to Israeli policies.

“I will not allow an IDF soldier that was protecting himself from terrorist fire to be prosecuted just to receive applause from abroad,” he said, referring to the Israeli military.

“No one will dictate our open-fire policies to us when we are fighting for our lives. Our soldiers have the full backing of the government of Israel and the people of Israel,” he said.

Lapid is serving as caretaker prime minister ahead of elections in November and faces an uphill battle against nationalist rivals to keep from losing his post.

State Department deputy spokesman Vedant Patel, speaking to reporters in Washington on Tuesday, said the U.S. would press Israel on the matter and insist on accountability.

“We’re going to continue to press our Israeli partners to closely review its policies and practices on rules of engagement and consider additional steps to mitigate the risks of civilian harm, protect journalists, and prevent similar tragedies in the future,” he said.

Israel has carried out nightly raids across the occupied West Bank following a string of deadly attacks by Palestinians last spring that killed 19 people.

At least 90 Palestinians have been killed by Israeli fire this year, according to the Palestinian Health Ministry, making it the deadliest year in the occupied West Bank since 2016. Most appear to have taken part in clashes that erupted during the raids, but a number of civilians, including Abu Akleh, have also been killed in the violence.

Israel says its soldiers are battling armed groups that target civilians and must make split-second decisions on the battlefield. The military’s rules of engagement allow soldiers in the field to open fire when they perceive that their lives are in danger.

Israeli rights groups say soldiers interpret those rules broadly, often use excessive force and are rarely held accountable when they shoot civilians. The Palestinians say the raids are aimed at maintaining Israel’s 55-year military rule over territories they want for a future state.

Abu Akleh, a veteran Palestinian-American reporter, was killed on May 11 while covering an Israeli raid in the Jenin refugee camp in the northern West Bank. Several independent investigations, including one in May by The Associated Press, concluded she was likely killed by Israeli troops.

Israel still maintains that she could have been struck by Israeli or Palestinian gunfire, but has not provided any evidence showing that Palestinian militants fired in her direction or that any militants were near her when she was shot.

Abu Akleh was with a group of journalists walking down a road after sunrise who were all wearing helmets and protective vests that clearly identified them as media.

Israel said its own investigation found there was a “high probability” she was shot by one of its soldiers in a vehicle with a telescopic lens who misidentified her. The army said the soldier’s vision was limited at the time, raising questions about its open-fire rules.

It said no criminal investigation would be launched, meaning that neither the soldier nor commanders will face any punishment.

In Lebanon, boat tragedy kills 94 but others plan to migrate 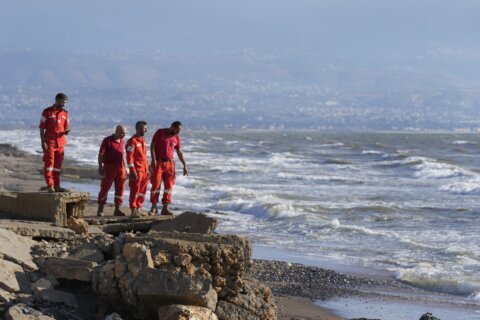