BEIRUT (AP) — The scheduled arrival Sunday of the first grain ship to leave Ukraine and cross the Black Sea under a wartime deal has been delayed, a Lebanese Cabinet minister and the Ukraine Embassy said.

The cause of the delay was not immediately clear and Marine Traffic, which monitors vessel traffic and the locations of ships at sea, showed the Sierra Leone-flagged Razoni at anchor in the Mediterranean Sea near Turkey.

Lebanon’s transportation minister, Ali Hamie, tweeted the ship “that was supposed, according to what was rumored, to reach Tripoli port in Lebanon” changed its status. Hamie refused to comment further when contacted by The Associated Press.

The ship left Odesa last Monday carrying Ukrainian corn and later passed inspection in Turkey. It was supposed to arrive in the northern port of Tripoli at about 10 a.m. Sunday. According to Marine Traffic, the ship Saturday changed its status to “order” meaning the ship was waiting for someone to buy the corn.

The shipment that was supposed to arrive in Lebanon comes at a time when the tiny Mediterranean nation is suffering from a food security crisis, with soaring food inflation, wheat shortages and bread lines. The ship is carrying some 26,000 tons of corn for chicken feed.

The passage of the vessel was the first under a breakthrough deal brokered by Turkey and the United Nations with Russia and Ukraine. The four sides signed deals last month to create safe Black Sea shipping corridors to export Ukraine’s desperately needed agricultural products as Russia’s war upon its neighbor grinds on.

Lebanon’s worst economic crisis in its modern history that began in late 2019 has left three-quarters of its population living in poverty while the Lebanese pound has lost more than 90% of its value.

The economic meltdown rooted in decades of corruption and mismanagement was made worse by a massive blast in August 2020 that destroyed Beirut’s port and the country’s main grain silos inside the sprawling facility. Large parts of the silos collapsed in recent days after fire caused by remnants of grain that started fermenting and ignited in the summer heat last month.

Lebanese officials said last week that the Razoni was supposed to leave Ukraine and head to Lebanon on Feb. 24 but the departure was delayed by the war that broke out days later.

On Friday, three more ships carrying thousands of tons of corn left Ukrainian ports and traveled through mined waters toward inspection of their delayed cargo, a sign that the international deal to export grain held up since Russia invaded Ukraine was slowly progressing. 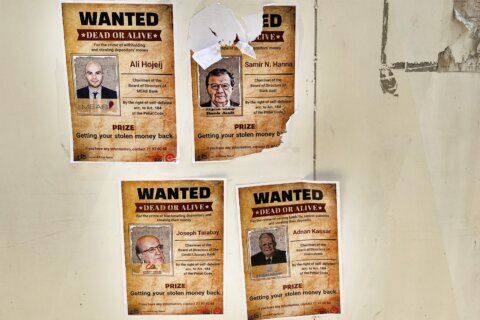