Sudan anti-coup group sits with generals for the first time

CAIRO (AP) — Sudan’s leading pro-democracy group has met with the country’s generals for the first time since last year’s military coup, the U.S. Embassy said Friday, in what could signal a breakthrough in attempts to bring the East African nation back on track toward a democratic transition.

The meeting held late Thursday in the capital, Khartoum, brought the Forces for the Declaration of Freedom and Change — an alliance of political parties and protest groups — together with representatives of the country’s ruling military council.

The talks focused on resolving the current political impasse and were mediated by the Saudi Embassy and the U.S. delegation in Sudan, the embassy said in a statement.

“We thank the participants for their frank & constructive participation and for their willingness to end the political crisis & to build a peaceful, just and democratic Sudan,” it said.

Since the military took over in October, the same pro-democracy group has refused to sit with the generals at the negotiating table, insisting they should first transfer power to a civilian government, return to the barracks, end violence against protesters and release all detainees.

The pro-democratic alliance said that it had received an invitation from U.S. Assistant Secretary of State Mary Catherine Phee and Saudi Ambassador Ali bin Hassan Jaafar to meet directly with the generals, according to and FDFC statement.

“We are keen to have two of the most influential countries in the region and the world remain supportive of the Sudanese people and the pro-democracy forces,” said a statement by the alliance, referring to Saudi Arabia and the U.S.

The meeting, held in the Khartoum residence of the Saudi ambassador was attended by four of the alliance’s leaders and three top military generals, including deputy head of Sudan’s ruling Sovereign Council, Gen. Mohamed Hamdan Dagalo, as well as Lt. Gen. Shams el-Din Kabashin and Lt. Gen. Ibrahim Gaber.

“The other party acknowledged that there is a political crisis and said they are willing to solve it,” said pro-democracy leader Taha Othman, who attended the talks in reference to the military.

“They affirmed that they had the sincere will to end the coup,” added Othman.

The group said that it had agreed to lay out a roadmap in consultation with other civilian groups that would include clear steps on how to reverse the political coup. This blueprint will be handed over to the international community, alliance leaders said at a news conference held on Friday.

There has been no immediate comment from the military.

The Forces for the Declaration of Freedom and Change had previously boycotted military-civilian talks that kicked off earlier this week under the auspices of the U.N. political mission in Sudan, the African Union, and the eight-nation east African regional Intergovernmental Authority in Development group. It had criticized the participation of pro-military groups and Islamists who had been allied with the former regime of longtime dictator Omar al-Bashir.

In April 2019, a popular uprising pushed the military to remove al-Bashir after nearly three decades of repression and international isolation. Eventually, the military and pro-democracy groups signed a power-sharing agreement that instated a joint military-civilian government that was supposed to rule until general elections be held. However, the Oct. 25 military takeover dealt a blow to the country’s democratic transition and plunged the nation into turmoil.

“We did not go to these talks to instate a new partnership with the military. We went to put an end to any partnership,” said Yasir Arman from the pro-democracy alliance who participated in the talks.

“We believe this is an opportunity to end the coup and ensure a safe exit for both the military and the people towards democracy, justice and a new society,” he added. 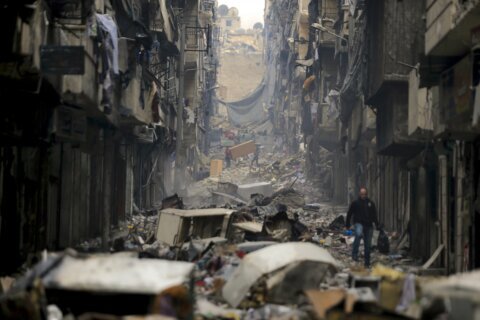