Israel holding more than 600 without charge, most since 2016

JERUSALEM (AP) — Israel is holding some 600 Palestinian detainees without charge or trial, the highest number since 2016, an Israeli rights group said Monday.

Israel says it uses so-called administrative detention to thwart attacks and to hold dangerous militants without revealing sensitive intelligence. Palestinians and rights groups say the system is widely abused and denies due process, with some detainees held for months or years without seeing the evidence against them.

HaMoked says 2,441 Palestinians are serving sentences after being convicted in military courts. Another 1,478 detainees are being held for questioning, have been charged and are awaiting trial, or are currently being tried.

Israel has seen a wave of attacks in recent weeks that have killed at least 15 people. It has carried out arrest raids across the occupied West Bank that it says are aimed at preventing more. Those operations have ignited violent protests and gunbattles.

At least 29 Palestinians have been killed, according to an Associated Press tally. Most were killed after carrying out attacks or during clashes with Israeli forces, but an unarmed woman and two people who appear to have been bystanders were also killed.

The last time Israel held this many administrative detainees, in October 2016, was also in the wake of a surge in violence, including stabbings, shootings and car-ramming attacks carried out by Palestinians.

“Administrative detention is used only when the security forces have credible and well-established information of an actual security threat posed by the detainee, and when other avenues to remove the threat are not feasible,” the army said in a statement.

Israel says all administrative detention orders are subject to judicial review. Detainees can appeal to a military court of appeals or Israeli’s Supreme Court, but rights groups say the courts overwhelmingly defer to the security establishment.

Jessica Montell, the director of HaMoked, said violence does not justify detaining hundreds of people for months or years without charge.

“It’s like an assembly line of administrative detention, far in excess of what can be justified under international law,” she said, which only allows preventive detention under rare circumstances for a limited period of time.

Those held could include dangerous militants, but also cases of mistaken identity. A teenager with a rare neuromuscular disorder has been held in administrative detention for over a year.

Several Palestinians in administrative detention have gone on prolonged hunger strikes in protest, with many developing lifelong health issues. Administrative detainees and their lawyers have boycotted Israeli military court proceedings since the start of this year in protest. The courts are holding hearings without them, according to B’Tselem, another prominent Israeli rights group.

The West Bank has been under Israeli military rule since Israel captured the territory in the 1967 Mideast war. The Palestinians want it to form the main part of their future state.

The territory’s nearly 3 million Palestinian residents are subject to Israel’s military justice system, while the nearly 500,000 Jewish settlers living alongside them have Israeli citizenship and are subject to civilian courts. 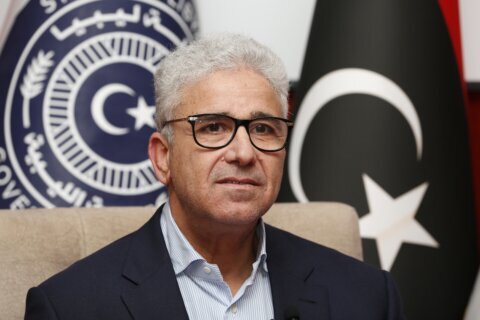