JERUSALEM (AP) — Israeli authorities on Wednesday said they have given the go-ahead for flag-waving Jewish nationalists to march through the heart of the main Palestinian thoroughfare in Jerusalem’s Old City later this month, in a decision that threatens to re-ignite violence in the holy city.

The office of Internal Security Minister Omer Barlev said the march would take place on May 29 along its “customary route” through Damascus Gate.

Each year, thousands of Israeli nationalists participate in the march, waving Israeli flags, singing songs and in some cases, chanting anti-Arab slogans, as they pass by Palestinian onlookers and businesses.

Barlev’s office said the decision was made after consultations with police.

The march is meant to celebrate Israel’s capture of east Jerusalem in the 1967 Mideast war. Israel subsequently annexed the area in a step that is not internationally recognized. The Palestinians claim east Jerusalem as the capital of a future state.

Last year’s Gaza war erupted as the march was just getting underway, even after authorities changed the route at the last moment to avoid Damascus Gate.

The Old City, located in east Jerusalem, has experienced weeks of violent confrontations between Israeli police and Palestinian demonstrators, and the march threatens triggering new unrest.

Tensions also have been heightened by an Israeli police crackdown during the funeral of slain Al Jazeera journalist Shireen Abu Akleh last Friday. As the funeral procession got underway, police pushed and beat mourners, causing the pallbearers to lose control of the coffin and nearly drop it.

One of her pallbearers, Amro Abu Khdeir, 34, has been in solitary confinement since being arrested early Monday, according to his lawyer. Attorney Khaldoun Najm said Abu Khdeir’s detention has been extended until Sunday. Israeli authorities say he is a member of a militant organization and that they have a file on him, Najm said.

Israeli police said in a statement that Abu Khdeir was arrested “as part of an ongoing investigation which, contrary to allegations, had nothing to do with his participation in the funeral procession.” The statement confirmed that a court has extended his detention. The police refused further comment.

Abu Akleh, a well-known journalist, was fatally shot while covering an Israeli military raid in the occupied West Bank last week. The Palestinians, including witnesses who were with her, say she was shot by Israeli troops. Israel says that Palestinian gunmen were active in the area, and it is not clear who fired the deadly bullet. 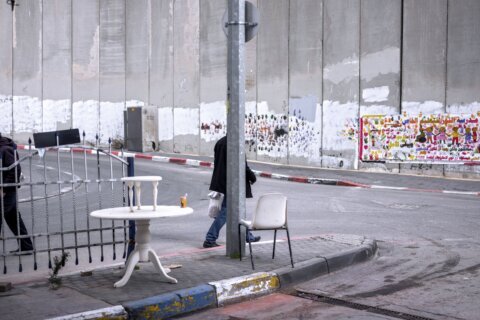