“Our knowledge and technology in the nuclear field is not reversible. Iran’s (continuation of) research in peaceful nuclear fields will not depend on others’ demands or viewpoints,” said Raisi, who came to power in August.

Raisi’s comments came as talks between Iran and world powers in Vienna to revive the 2015 nuclear deal have stalled. There is concern that Iran could be closer to being able to construct an atomic weapon if it chose to pursue one.

The nuclear deal collapsed four years ago when former President Donald Trump withdrew the United States and imposed crushing sanctions on Iran. In the meantime, Iran has vastly expanded its nuclear work.

Iran has long insisted that its nuclear program has had peaceful purposes like generating electric power and medical isotopes.

The head of Iran’s civilian Atomic Energy Organization, Mohammad Eslami, said Iran will soon pursue construction of a new nuclear power plant with 360-megawatt capacity. It is to be located near the town of Darkhovin in oil-rich Khuzestan province in the country’s southwest.

The plant was supposed to be built before the 1979 Islamic Revolution with help from France but the project was halted in its initial phase. The site became a major battlefield in the 8-year war between Iran and Iraq that began in 1980.

Iran’s sole nuclear power plant, with 1,000-megawatt capacity, went online in 2011 with help from Russia in the southern port city of Bushehr.

Iran’s stockpile of enriched uranium continues to grow and it is currently enriching it at up to 60% purity. That’s the highest level ever by Iran and is a short technical step from weapons-grade levels of 90%. It is far greater than the nuclear deal’s 3.67% cap.

Meanwhile on Saturday, Iran imposed symbolic sanctions on more U.S. officials over their roles in harming Iran, the country’s Foreign Ministry said in a statement.

From time to time, Iran adds to a long list of sanctioned Americans. In January, Iran sanctioned more than 50 Americans for their alleged roles in killing a top Iranian general in Iraq in 2020. In 2021 Iran imposed sanctions on Trump, former Secretary of State Mike Pompeo and eight others.

The sanctions ban the targeted persons from travel to Iran and possible confiscation of their assets in Iran. They are seen as symbolic as the Americans don’t have any assets in Iran. 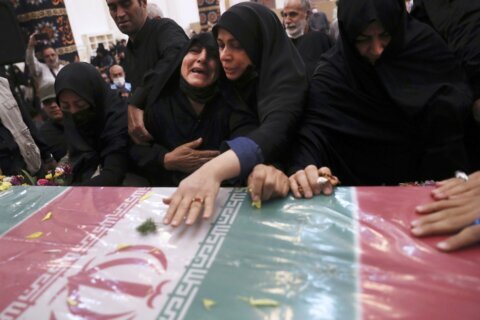