Sudan signs deal with ICC to get justice for Darfur victims

CAIRO (AP) — Sudan signed an agreement with the International Criminal Court on Thursday to move forward in the cases against those accused of atrocities in the Darfur region, including the country’s former President Omar al-Bashir, a top ICC prosecutor said.

Prosecutor Karim Khan said at a press conference that he would also be deploying a full-time team from his office to Sudan. The developments come as Sudan’s government continues to hold al-Bashir in prison. The ICC issued a warrant for al-Bashir on war crimes charges more than a decade ago, while he was in office.

The agreement further raises the possibility of al-Bashir being tried in The Hague, where the ICC is based, an issue that remains controversial in Sudan.

“This agreement provides a basis for cooperation and exchange of information in relation to all cases where there are warrants,” he said, adding that such cooperation will help the ICC build strong cases.

Al-Bashir has been in jail in Khartoum since his ouster in April 2019 amid a public uprising against his nearly three-decade autocratic rule. The ICC has charged him with crimes against humanity and war crimes in the Darfur conflict.

Though he did not discuss dates for a handover of al-Bashir, Khan said he welcomed the Sudanese Cabinet’s recent approval of a draft bill allowing the East African country to join the court’s founding treaty, known as the Rome Statute. The decision was a step forward in the long-waited trial of those wanted by the ICC. Khan said that the ratification of that bill is expected to be discussed next week at a joint meeting of Sudan’s ruling Sovereign Council and Cabinet, which together serve as an interim parliament.

When asked whether Bashir could be tried outside the Hague, Khan said the Rome Statue says that the ICC may convene away from the seat — a matter the court’s presidency and judges can decide on.

The conflict in Sudan’s Darfur region broke out when rebels from the territory’s ethnic central and sub-Saharan African community launched an insurgency in 2003, complaining of oppression by the Arab-dominated government in Khartoum. Al-Bashir’s government responded with a campaign of aerial bombings and raids by militias known as janjaweed. The militias stand accused of mass killings and rapes. Up to 300,000 people were killed and 2.7 million were driven from their homes.

“We cannot march from the darkness into the light without dealing with some of the crimes and injustices of the past,” Khan said.

He also said Sudanese authorities welcomed his decision to deploy a full-time team of ICC lawyers to Khartoum for better first-hand knowledge of “the undercurrents and the complexities” of the dynamics in Sudan.

Also indicted by the court are two other senior figures from al-Bashir’s rule: Abdel-Rahim Muhammad Hussein, interior and defense minister during much of the conflict, and Ahmed Haroun, a senior security chief at the time and later the leader of al-Bashir’s ruling party. Both have been under arrest in Khartoum since the Sudanese military, under pressure from protesters, ousted al-Bashir.

The court has also indicted rebel leader Abdulla Banda, whose whereabouts are unknown, and janjaweed leader Ali Kushayb, who was charged in May with crimes against humanity and war crimes.

“I have high hopes of Sudan and her people and the place that you want to hold in the world, which means closing this dark chapter,” said Khan. “Whether we like it or not, the ICC is part of that story and the dark chapter will not and cannot close until we have finished our work.” 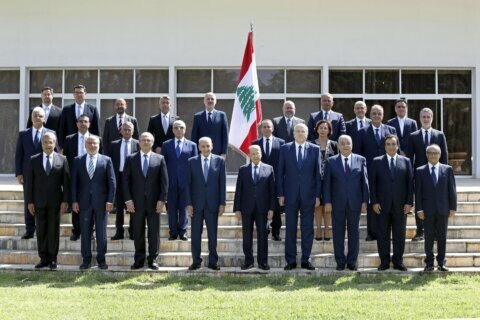