For the first time in nearly 50 years, the Church of Jesus Christ of Latter-day Saints is inviting the public to enter their D.C. temple.
Listen now to WTOP News WTOP.com | Alexa | Google Home | WTOP App | 103.5 FM
(1/3) 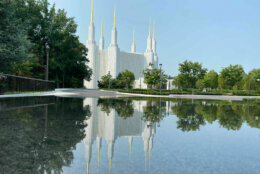 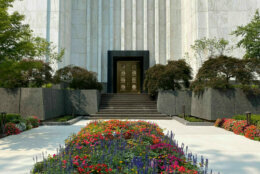 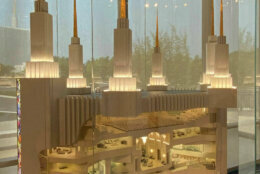 If you are an avid listener of WTOP’s traffic coverage on the 8’s, you will often hear reference to “The Temple.” Starting next year, you will be able to visit inside.

For the first time in nearly 50 years, the Church of Jesus Christ of Latter-day Saints is inviting the public to enter the Washington D.C. Temple — which is located in Kensington, Maryland.

Tours will start April 28 and run until June 4. The temple will be rededicated later that month following a years-long renovation project, and will once again close to non-Mormons.

The temple, with its tall spires and mid-century modern design, was completed in 1974. And that was the last time that the public was allowed to go through one of the many large double doors.

“We were here when the temple was dedicated back in 1974, just as a fellowship, and at that time WTOP would cover the traffic and they would always talk about the Mormon temple. Now, when WTOP covers it, it’s always ‘The Temple.’ And so we really do feel that this is a landmark building in Washington D.C.,” former temple president Kent Colton told WTOP.

“It’s really an opportunity. People have been able to look at it for 40-plus years. Now they are able to come inside.”

Dan Holt, who managed the renovation, said the inside of the temple maintains its mid-century motif with an added “21st-century flair.”

“Our hope,” Holt added, “is that both the design of the building and the materials and equipment that we put in are going to last another 50 to 100 years — and do so efficiently and effectively.”

The renovations began in March 2018, with a focus on the 160,000-square-foot building’s mechanical, electrical, plumbing and lighting systems.

In February 2020, the church scheduled a similar public open house for that fall, which they canceled amid the COVID-19 pandemic.

“I think the delay into next year will hopefully bring us more of the global audience that want to come,” said Anne Golightly, the Washington D.C. Temple open house chair.

“We know more than half of our members live outside the United States. We are keenly aware of what’s going on with pandemic in other parts of the world. And we are hopeful that that will hopefully abate a little bit more before April.”