Bird poisonings along Maryland’s Eastern Shore are getting worse, and federal and state wildlife officials are scrambling for answers.

Nine bald eagles and a great horned owl are the latest victims in what the Maryland Natural Resources Police suspect to be an ongoing and intentional poisoning of animals in Kent and Talbot counties, with foxes and raccoons also recently dead from the same cause.

Maryland officials and the U.S. Fish and Wildlife Service are appealing to the public for more information in two incidents. Six bald eagles and the owl were found dead on Wednesday, in the vicinity of Route 445 and Swan Creek in Chestertown.

On April 3, wildlife authorities were called to a Talbot County farm near Lewistown Road and Colby Road in Cordova, where three bald eagles were showing signs of poisoning after feeding on a fox carcass. Two of the eagles were stabilized, while the third died.

Officials believe baits laced with carbofuran, a toxic pesticide whose potency poses a particularly grave threat to birds, are likely the source of the poisonings. Granular Carbofuran, marketed under trade name Furadan, is so lethal to birds that a single grain — often mistaken by the animals for seeds — is enough to kill.

“The USFWS believes that whoever was placing the poisoned baits did it so recklessly that the poison was likely lying out in the open for any animal or person to find,” the Maryland Department of Natural Resources said in a news release Wednesday.

The agency expressed disappointment and frustration at the persistence of the poisonings, having responded to similar incidents back in 2016.

Despite several interviews with land owners, hunters and others in the areas of the poisonings, none have evidently yielded enough information to identify a culprit.

“It is hard to believe that not one person has information of persons placing a toxic poison that has killed no fewer than 20 eagles in these areas,” said Jay Pilgrim, who supervises federal wildlife efforts in the D.C. and Delmarva areas. “The only way this stops is if the local communities come forward with information.”

Members of the public with information on illegal hunting or wildlife poisonings are urged to contact state authorities by calling or texting 443-433-4112, or by emailing mwc.dnr@maryland.gov. 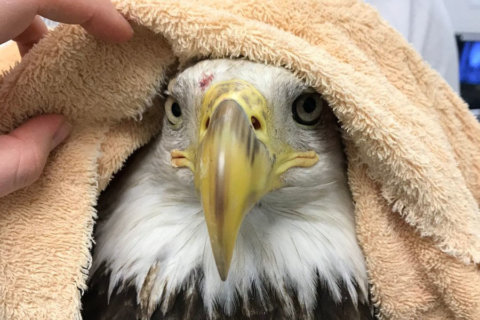