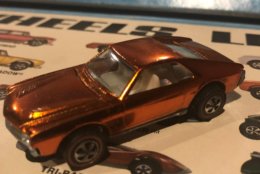 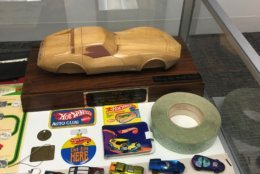 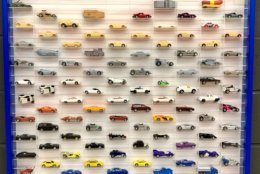 WASHINGTON — When he was 7 years old, Bruce Pascal’s Matchbox cars weren’t doing it for him.

“They came in a box, so you couldn’t see the car unless you opened it up. They didn’t have great colors or details. And then, if you pushed the car, it only went two inches,” Pascal said.

Then, in May of 1968, toy maker Mattel introduced Hot Wheels.

“Hot Wheels were meant to be driven,” said Pascal, who’s from Montgomery County. “It had the same paint process as a real car, with great vivid colors, and if you touched the car it would roll feet, not inches.”

For a young boy, the fantasy was intoxicating.

“The 16-year-old cool kid in the neighborhood had a Camaro — I had my green Camaro,” Pascal said.

Without mentioning Matchbox cars by name, early Hot Wheels ads trumpeted “these are the fast ones,” and depicted competing die-cast toys, not equipped with the freely-spinning wheels failing to navigate loops, and miserably falling victim to gravity.

The lure of stylish speed was affordable, Pascal said.

“When they first came out, they were 68-cents to 78-cents, and today, if you catch a super sale at Walmart, you can get ’em for 88-cents,” Pascal marveled. “It is an absolute miracle that for 50 years, the price has barely gone up.”

Pascal said he took a long break from Hot Wheels.

“About 20 years ago, when I was 37 years old, my mother said, ‘Come to the house, I’ve got some stuff, I’m cleaning out your old bedroom,'” Pascal said. “She handed me a shoe box filled with about 40 Hot Wheels.”

Over time, Pascal realized he had a valuable commodity. When the rarest Hot Wheel in the world became available for sale — a pink Volkswagen bus prototype — he bought it.

With internet research, he’s tracked down 400 former Mattel employees and has compiled blueprints of cars, as well as wooden prototypes of rare Hot Wheels.

Pascal said his collection of 7000 Hot Wheels related items has an estimated worth of $1.5 million.

He said sales figures show approximately 20 percent of Hot Wheels sales are made to adults.

“You walk around a lot of offices, and you’ll see a Hot Wheels or two on many people’s desks,” said Pascal. “Especially if it matches the car they drive or their favorite car.”

It’s recount season in Maryland. Here’s where they’re happening and how they work