Thursday’s snowy scenes may have you daydreaming about a beach day – but the conditions in Ocean City are probably not what you had in mind. Watch live as blizzard conditions transform Ocean City.

WASHINGTON – Thursday’s snowy scenes may have you daydreaming about a beach day – but the conditions in Ocean City, Maryland, are probably not what you had in mind.

Want a live look? Keep up with the latest conditions in Ocean City via this webcam.

Maryland Gov. Larry Hogan declared a state of emergency on Wednesday for Somerset, Wicomico, and Worcester counties ahead of the storm.

NBC Washington’s Justin Finch shared video from the boardwalk Thursday morning, though the familiar beach was hard to discern.

Snow transformed the boardwalk into a winter wonderland.

The Ocean City boardwalk IS under there! Could see as much as 8 inches of snow out here! pic.twitter.com/dgPL0c4Esh

Another look eastward. DE/MD beaches not getting biggest amounts but visibility and wind speeds are blizzard criteria. Coastal south Jersey is getting it all! pic.twitter.com/tyEOUZOZ4V

Snowplows were already busy early in the day, trying to keep paths clear.

❄️🚜 This plow operator put on a show for us on the boardwalk. Nice dramatic drop of snow at the end. It’s coming down out here in Ocean City! 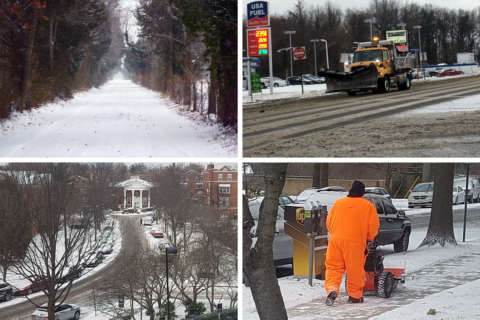