With the heroin and opioid epidemic raging across the region, more counties in Maryland are considering adding controversial needle exchange programs in their fight to stop the spread of infectious diseases among drug users.
Listen now to WTOP News WTOP.com | Alexa | Google Home | WTOP App | 103.5 FM

WASHINGTON — With the heroin and opioid epidemic raging across the region, more counties in Maryland are considering adding controversial needle exchange programs in their fight to stop the spread of infectious diseases among drug users.

At least six counties are either considering a program or actively developing one, as first reported by The Baltimore Sun.

“When we’re able to keep people from sharing needles, we do an incredible job of reducing harm in so many ways,” said Dr. Howard Haft, deputy secretary for public health services with the Maryland Department of Health and Mental Hygiene.

Haft spoke about the issue in front of a legislative committee last year, when state lawmakers passed a bill allowing local health departments across Maryland to develop and establish their own needle exchange programs.

“It’s not just HIV. In those dirty needles and syringes live so many other contaminants,” Haft said, referencing hepatitis B and C and common bacteria that cause infections of the skin and soft tissue.

Although critics say the programs may encourage drug use, many experts claim they do the opposite, offering users a way out.

“People who are sharing needles are people who are disconnected from the health care system,” said Haft. “By having syringe exchange programs, we reconnect them to that system.”

In addition to disposing of dirty syringes and needles and providing access to clean ones, the programs aim to give users access to counseling and substance abuse treatment.

Users may also be given Naloxone, a substance that can block or reverse the effects of an otherwise fatal overdose.

Since 1994, Baltimore City has had the only needle exchange program in Maryland.

The city’s health department says its program “seeks to reduce HIV, hepatitis C, and other infections by reducing the circulation of unclean syringes” and also “helps individuals with substance use disorders overcome addiction by linking them to drug treatment services.” 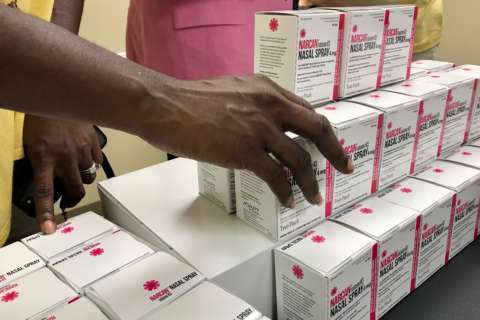