Maryland's governor is taking another crack at redrawing voting boundaries in the free state, asking for lawmakers' support of his plan to have a nonpartisan group tackle redistricting.
Listen now to WTOP News WTOP.com | Alexa | Google Home | WTOP App | 103.5 FM

WASHINGTON — Maryland’s governor is taking another crack at redrawing voting boundaries in the free state, asking for lawmakers’ support of his plan to have a nonpartisan group tackle redistricting.

“We haven’t had balance, fairness or competitiveness in Maryland for decades,” said Gov. Larry Hogan. “In fact, we’ve been singled out for having some of most gerrymandered and unfair districts in America.”

At a news conference, he called upon lawmakers who were meeting to discuss redistricting to adopt his concept of a Maryland Redistricting Reform Commission, aimed at taking the process out of legislators’ hands.

“I’ve heard a lot of calls to wait until Congress fixes it, but Maryland has always been a leader in the great issues of education, transportation, environment and criminal justice,” said retired federal judge Alexander Williams, who serves as commission chair. “So, in my view, Maryland should tackle this tough problem, wrestle with it and get it done.”

Hogan took a jab at his predecessor Martin O’Malley in calling the existing district maps “absurd and disgraceful.”

“In places like White Marsh, Owings Mills, Towson and Baltimore County, towns are cut up into two or three different pieces in an effort to keep one party in control,” he said.

Some democratic lawmakers are redirecting the conversation to efforts at the congressional level to overhaul existing districts. Hogan said the argument indicates that because of the task’s difficulty, they don’t want anything to change.

“If it isn’t done, what’s going to happen is the courts — the Supreme Court or lower courts — are going to end up drawing the lines here in Maryland. That’s not what we want,” Williams said in response. 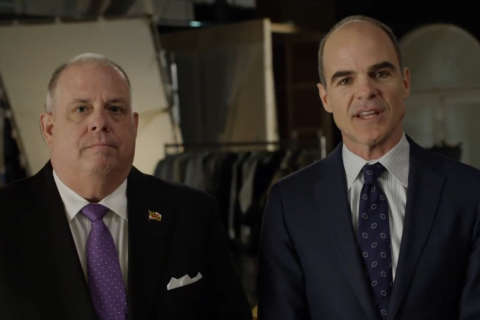