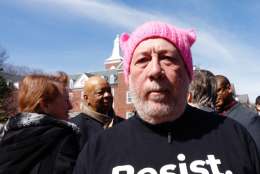 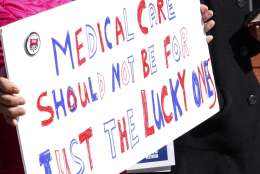 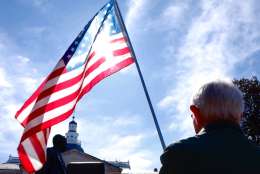 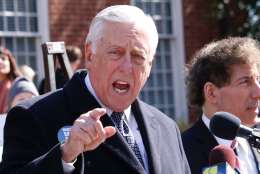 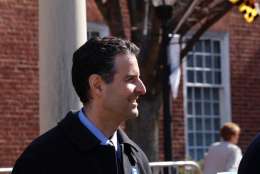 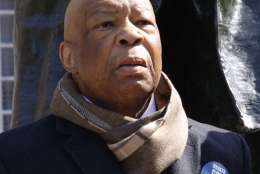 Reps. Steny Hoyer, Elijah Cummings, John Sarbanes and Jamie Raskin gathered in front of the governor’s residence on Monday to criticize Hogan for not joining four GOP governors who’ve made their own proposal about how to overhaul Medicaid for low-income people.

“I could not sleep at night if I knew that several hundred thousand Marylanders were about to get thrown off their health care plans and I did nothing,” Raskin said.

He added that he was diagnosed with colon cancer when he was a member of the Maryland Senate. “And anyone who’s been through that knows what a devastating thing it is just physically, psychologically and emotionally. Why would we compound that with the problems of not having health insurance?”

Amelia Chasse, a Hogan spokeswoman, questioned what the four congressmen have done, except hold press conferences. She says the four Democrats are “grandstanding.”

She added that the four were “disregarding the governor’s direct appeal to them to work in a bipartisan manner to come up with responsible solutions for Maryland” and that “they should tell their friends in the legislature to quit holding up our health secretary’s confirmation.”

Told of the accusation of grandstanding, Raskin responded, “I’m not grandstanding; I think I’m doing my job,” while Cummings, addressing Hogan, said, “Come down here and say that!”

Four Republican governors in Ohio, Nevada, Michigan and Arkansas are calling for a more gradual approach to overhaul Medicaid that would include more options for states.

Bob Jones, of Annapolis, was also near the mansion, and said he wants to save the Affordable Care Act, which the Republican health bill, the American Health Care Act, would repeal.

Jones said his adult daughter, an independent contractor, has epilepsy. “And if she loses Obamacare, I don’t know what’s going to happen. … When she’s out, she’s out. Right now she has affordable care. She is surviving. She loses that, who knows?”

Jones was asked about the complaints that under Obamacare, premiums shot up. Jones said joking, “Oh, yeah, it went horribly up! It went up to 10 dollars more. She was paying $109; it went up to $119” a month.

Jones, who sported one of the pink hats that many anti-Trump protesters wore during the Women’s March the day after Inauguration Day in January, explained why he feels so passionately about health care.