D.C.’s bald eagles are the focus of a lot of anxious eyes as webcam watchers check in on the latest developments of the nesting pair and their young family. But there’s a lot more "reality TV" in bird land.
Listen now to WTOP News WTOP.com | Alexa | Google Home | WTOP App | 103.5 FM
(1/5) 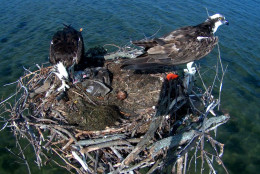 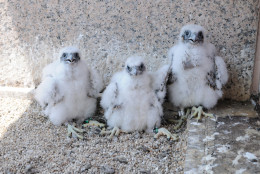 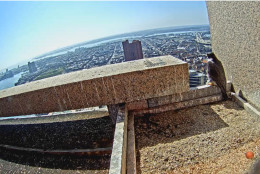 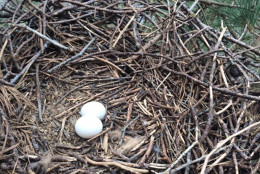 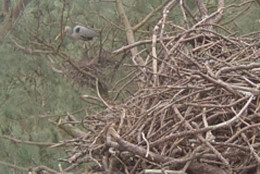 WASHINGTON — D.C.’s bald eagles are the focus of a lot of anxious eyes as webcam watchers check in on the latest developments of the nesting pair and their young family. But there’s a lot more “reality TV” in bird land.

There’s also Boh and Barb, and Tom and Audrey — a pair of peregrine falcons in Baltimore and an osprey couple in Maryland’s Chesapeake Bay.

They’re the stars of webcams placed by the Chesapeake Conservancy, a nonprofit working to raise awareness about the health of the famous watershed that gives life to the region’s iconic blue crabs, for example.

Joe Dunn, president and CEO of the Chesapeake Conservancy, says the return of Boh and Barb to the 33rd floor of the Transamerica building in downtown Baltimore is part of an amazing story of environmental recovery. At one point, peregrine falcons were eliminated in the region — decimated by the chemical DDT, which was widely used in the 1950s and ’60s.

Dunn says in 1977, the Peregrine Fund released a falcon that ended up nesting on the 33rd floor of the Transamerica building. Boh and Barb are direct descendants of those birds.

“It’s one of the most important conservation success stories in our nation’s history,” Dunn says.

Unlike the American bald eagle, peregrines don’t build large nests. In fact, they don’t build nests at all. Barb just deposits her eggs on a rocky outcropping — or in this case, a high-rise rooftop.

It can look a bit unnerving to webcam observers when compared with the hovering of the bald eagle over the eggs in its nest, but Dunn says Boh and Barb have been very successful parents in the past. Chalk it up to different parenting styles.

And then there’s the story of Tom and Audrey.

Last year, Audrey laid eggs that didn’t hatch, so fosters were placed in her nest.

“It was the most dramatic reality show you could imagine,” Dunn says. “We had over a million visitors to the website to watch that story unfold.”

And it was a happy story: Audrey took to the young additions to her nest as if they were her own. Tom, it should be noted, is Tom II. It’s not clear what happened to Tom I, but Audrey seems to have adjusted to “new Tom” just fine.

Dunn says the ospreys are back after spending the winter separately in South America. That’s not a reflection of their relationship; it’s how ospreys live — on their own in the winter, together to raise the kids.

A webcam has been set up at the osprey nest for four years, but this year there’s a twist.

“This year we actually have an infrared camera so we can see them at night, which is really cool!” Dunn says, whose enthusiasm for the webcam stars and the Chesapeake Bay’s wildlife is infectious.

Next, Dunn says, the Chesapeake Conservancy hopes to add a third site to the network of birdcams: this one part of a great blue heron “rookery” in the Chesapeake Bay.

Dunn says the webcams are not only fun to watch; they help people connect to the Chesapeake Bay in a way they weren’t able to before. “It’s a great way to engage people about our mission: to protect and restore the Chesapeake Bay and save our special places.”

Check out the Peregrine falcon webcam and osprey webcam.

A heron webcam is in the works, but is in need of some funding. A GoFundMe page has been set up for the Great Heron Rookery Webcam.