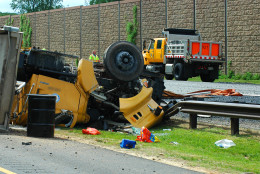 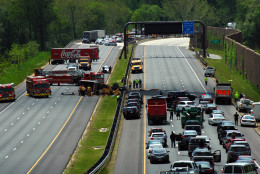 WASHINGTON — The Maryland Transportation Authority confirms a Highway Services Employee is dead after an accident on the Intercounty Connector Wednesday afternoon.

According to a spokesperson for the agency, it is the first fatal crash that has occurred on the road since it opened in November 2011.

Another vehicle, a 2004 Nissan Altima, was also involved in the incident. MDTA police spokesman 1st Sgt. Jonathan Green says the driver of the Nissan was transported to MedStar Montgomery Medical Center and suffered non-life-threatening injuries.

The cause of the accident is still under investigation.

Some drivers sat in delays for over an hour while a medevac helicopter touched down on the road. Drivers behind the crash scene were eventually turned around by Maryland State Police. The westbound lanes of the Intercounty Connector were closed while state highway crews used bulldozers to clear the gravel spill. Some westbound lanes were reopened to traffic by 4:30 p.m.

All lanes were reopen to traffic both ways by 8 p.m.