After big DC snowstorm, forecast fit for sledding: Here’s what to know and where to go

What better way to mark a snow day than by digging the toboggan out of the garage and going sledding? Here's where to go -- and what to know.
Listen now to WTOP News WTOP.com | Alexa | Google Home | WTOP App | 103.5 FM

As the snowfall winds down on the first major snowstorm to hit the D.C. area in a few years, the region is blanketed in snow and many roads are still impassable. But what better way to mark a snow day than by digging the toboggan out of the garage and going sledding?

The snowstorm provided plenty of snow cover for sledding, dumping over 8 inches in D.C. and Montgomery County, Maryland, 10 inches in Alexandria and a whopping 11 1/2 inches in Capital Heights in Prince George’s County.

Also aiding the sledding forecast is the heavy, wet consistency of the snow, which is better for sledding than drier, fluffier snow.

If you plan to head out, keep in mind that authorities are still working to clear roads — so it’s probably not a good idea to hop in the car to head to your nearest sledding hill.

Another potential concern: All that heavy snow is weighing down tree branches and could cause them to snap.

Earlier Monday, officials at the U.S. Capitol — typically a prime sledding spot — closed the West Front of the Capitol with its majestic hill because the heavy snowfall was breaking branches.

As a side note, sledding on the Capitol grounds has been an unusually fraught issue over the years. In 2015, Capitol Police banned sledding on the grounds, leading to a sled-in by some D.C. families who defied the ban.

Since then, D.C. Del. Eleanor Holmes Norton has been consistently inserting into annual legislation a measure that requires the grounds to remain open for sledding. In a statement Monday, Norton said she expected the grounds to reopen to sledders later Monday.

“This could be the only snowstorm D.C. gets this winter, and may be one of the best for sledding in years,” Holmes Norton said in the statement. “Children and their parents should be able to enjoy sledding on one of the best hills in the city.”

Still, even if you don’t plan to sled on the Capitol grounds, falling branches are a concern elsewhere.

“Anyone walking around trees would definitely need to be aware of the possibility of some falling branches — limbs if not entire trees,” Ritter said. “Because all that stuff that’s caked onto the branches right now makes them susceptible to breaking off, especially in these winds that are going to persist and be gusty for the rest of the afternoon and evening.”

Finally, bundle up. It’s very cold outside already, and it’s only going to get colder.

“At these temperatures and these wind speeds, wind chills are going to be in the teens and single digits as we head into the evening,” Ritter said. “So anyone who’s having fun in this type of environment just needs to be properly bundled up.”

As for where to go, we turned to Twitter, asking for the best sledding hills in the D.C. region. Tipsters pointed us to the Masonic Temple in Alexandria, Virginia; the Wesley Theological Seminary, off Massachusetts Avenue in Northwest D.C.; and Robert Frost Middle School in Rockville.

Montgomery Parks, which is part of the Maryland-National-Capital Park and Planning Commission, has put together a list of “approved” sledding locations throughout the county.

And if sledding is not your thing, check out the Smithsonian Castle on the National Mall from 3:30 p.m. until dusk for what organizers on Facebook are calling an epic snowball fight calling, fittingly enough, the “Battle of Snomicron.” 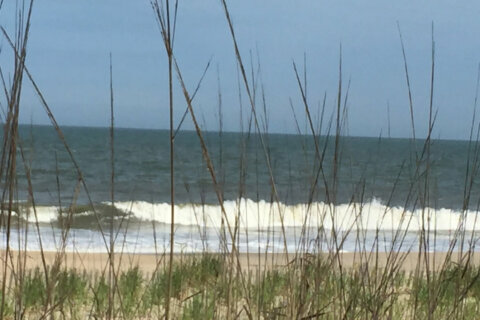