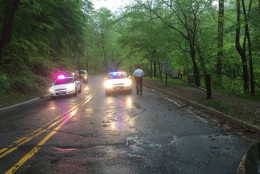 WASHINGTON — Monday night’s thunderstorms have left at least one major road flooded, trees downed and thousands of people without power around the area.

Roads around the area have been clogged by crashes from the slick roads, and simply from standing water and debris such as downed trees. It’s all been having a ripple effect, she said, with Interstate 95 in Maryland is backed up into Howard County because of several crashes on the Capital Beltway.

Parts of Beach Drive in Montgomery County have been closed; a portion of the same road in D.C. was also closed until about 7 a.m.

There were major delays on southbound 295 at Eastern Avenue as standing water from the storm blocked off two lanes. All lanes reopened at about 9:15 a.m.

“If your travels take you over places where you’ve seen flooding in the past, you’ll probably see it again,” WTOP’s Neal Augenstein reports from Beach Drive.

Meanwhile, trees have fallen on houses, cars and roads around the area. A tree fell on three cars on 13th Street in Northwest D.C., heavily damaging them. No one was hurt.

The left lane of inbound Rhode Island Avenue is blocked by a downed tree before Logan Circle.

Prince George’s County Fire and EMS spokesman Mark Brady says that houses have been damaged by trees on Paynes Endeavor Drive and Gallery Street, in Bowie; on Princess Garden Parkway, in Lanham; and Sugar Maple Terrace, in Upper Marlboro — “just to name a few,” he said via Twitter.

At one point, nearly 7,000 people in the area were without electricity after the storm. As of 8 a.m., Pepco was reporting about 200 residents without power, mostly in Prince George’s County, as well as a few in D.C. Dominion Power reported about 60 customers without power in Northern Virginia. 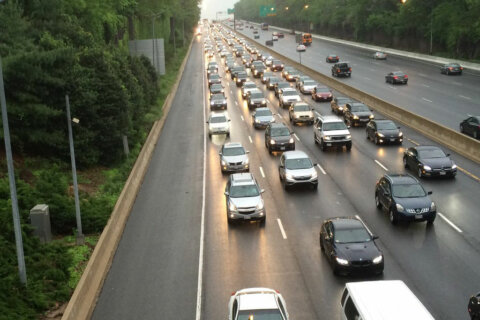 With holidays ahead, small businesses struggle with supply chain disruptions